ALLEN PARK, Mich. - As hard as this is to believe, Matthew Stafford’s injury may not be Detroit’s biggest problem.

The veteran quarterback missed a second straight game last weekend with back and hip problems, but unless he could have played defense, Stafford might not have been able to win that game. The Lions put up a decent amount of points but lost 35-27 to Dallas.

“The way the whole season is turning out right now is definitely shocking to me,” defensive back Tracy Walker said.

Detroit’s postseason hopes are pretty much done, and it’s not clear when Stafford might play again. Coach Matt Patricia said Monday the team is “week to week” with that situation. Backup Jeff Driskel wasn’t bad against the Cowboys, though. The Lions scored enough to stay in the game. 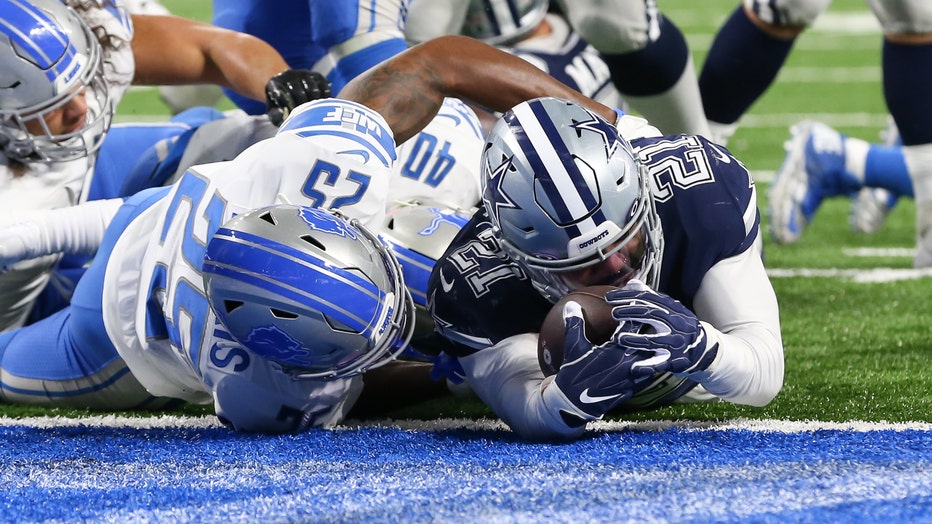 DETROIT, MI - NOVEMBER 17: Dallas Cowboys running back Ezekiel Elliott (21) runs with the ball for a touchdown during a regular season game between the Dallas Cowboys and the Detroit Lions on November 17, 2019 at Ford Field in Detroit, Michigan. (Pho

It was the defense that didn’t pull its weight. Dak Prescott threw for 444 yards and three touchdowns.

“I would say on the defensive side of the ball, we know the Cowboys do a lot of shifts, a lot of motions, a lot of different formations, things like that,” Patricia said. “So there was going to be some communication out on the field that we had to get right, and I think we missed a couple of those, which was disappointing to see from that aspect of it and opened up some big plays.”

Stafford hadn’t missed a start since the 2010 season, but the offense was reasonably productive without him last weekend. The Lions are also without injured running back Kerryon Johnson.

Driskel threw for 209 yards and two touchdowns against the Cowboys, and the Lions did not have a turnover.

Pretty much everything on the defensive side of the ball is substandard, and that’s after the Lions made major additions on the defensive line before the season. Detroit is allowing 413 yards a game - only Arizona and Cincinnati have marks worse than that. The Lions are also near the bottom of the NFL against the pass, and they haven’t been great at stopping the run either.

Walker demurred after he was asked if players are being put in the proper positioning.

“When it comes to all that, dealing with the coaching and the play calling, I stay away from that,” he said. “When it comes to me, I just do my job, and when my job called, I handle my responsibilities.”

Bo Scarbrough’s stock was nonexistent before last weekend. He’d never played in an NFL game before the Lions signed him off the practice squad and put him in against Dallas. He had 14 carries for 55 yards and a touchdown.

Patricia is getting serious criticism in the Detroit area, and it’s understandable. It’s not just that the Lions are losing. The defensive struggles in particular seem like an indictment of the second-year coach, who was the defensive coordinator with New England before being hired by the Lions.

Patricia was evasive when asked Monday about whether he’s taken more control of the defensive play calling.

7 - The number of passes of at least 20 yards allowed by the Lions on Sunday.

The Lions are favored this weekend, when they’re on the road against an awful Washington team. Then they return home for their Thanksgiving game against Chicago.