COLUMBUS, Ohio - COLUMBUS, Ohio (AP) — C.J. Stroud threw for nearly 400 yards and six touchdowns in the first half as No. 5 Ohio State made it look easy in a 56-7 blowout of No. 7 Michigan State on Saturday.

Stroud finished 32-for-35 against the Spartans' sketchy pass defense, which had allowed more yards through the air than any in major college football, and positioned himself as maybe the Heisman Trophy favorite heading into championship stretch of the season.

Michigan State Heisman hopeful Kenneth Walker III, the nation's leading rusher, was turned into a nonfactor by the Buckeyes. Walker had six carries for 25 yards.

By the time Stroud took a seat late in the third quarter, the redshirt freshman piled up 432 yards for the Buckeyes (10-1, 8-0 Big Ten, CFP No. 4), who polished their College Football Playoff resume and served warning to No. 8 Michigan ahead of the rivalry game next week that may end up determining the winner of the Big Ten East. 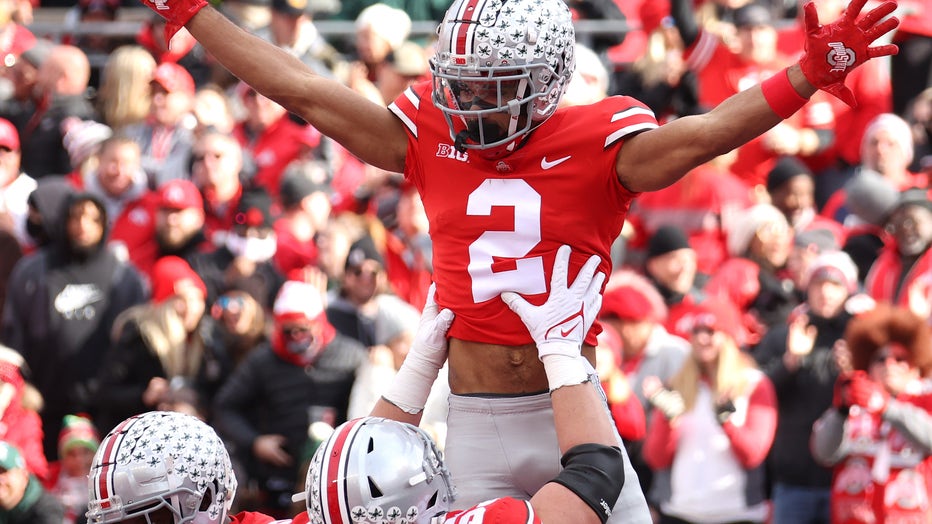 The Buckeyes' top three receivers all eclipsed the 100-yard mark and caught touchdown passes. Chris Olave had seven catches for 140 yards and two touchdowns. Garrett Wilson grabbed seven for 126 and a pair of scores, and Jaxon Smith-Njigba had 10 receptions for 105 yards and a TD.

Michigan State: The Spartans, who knocked off top-10 rival Michigan three weeks ago, weren't just sent tumbling from the Big Ten East playoff picture, they were demoralized. They've shown great improvement this season under second-year coach Mel Tucker, but are not yet in Ohio State's class.

Ohio State: Can anybody slow down the Buckeyes? The offense scored touchdowns on all seven first-half possessions, until coach Ryan Day backed off the gas. The defense forced a couple of first-half turnovers that helped produce the avalanche.

The Buckeyes scored 50 points for the sixth time this season.

The impressive win could bump the Buckeyes up the rankings, with another spotlight game next week in Ann Arbor. Michigan State, with a second loss, will tumble.

Ohio State: Wraps up the season with the annual clash and hatefest with Michigan.