SUNRISE, Fla. - SUNRISE, Fla. (AP) — Veteran Chris Tierney scored his first goal of the season in his second game with Florida, and the Panthers scored four times in the second period to beat the Detroit Red Wings 5-1 on Thursday night.

Rookie Matt Kiersted also scored his first goal for the Panthers, who have won seven straight against the Red Wings and 17 of the last 19 meetings. Tierney and Kiersted were recalled this week from Charlotte of the AHL and provided a boost for a team that's been dealing with injuries and illness.

Eetu Luostarinen, Josh Mahura and Matthew Tkachuk had Florida's other goals, and Sergei Bobrovsky made 20 saves. 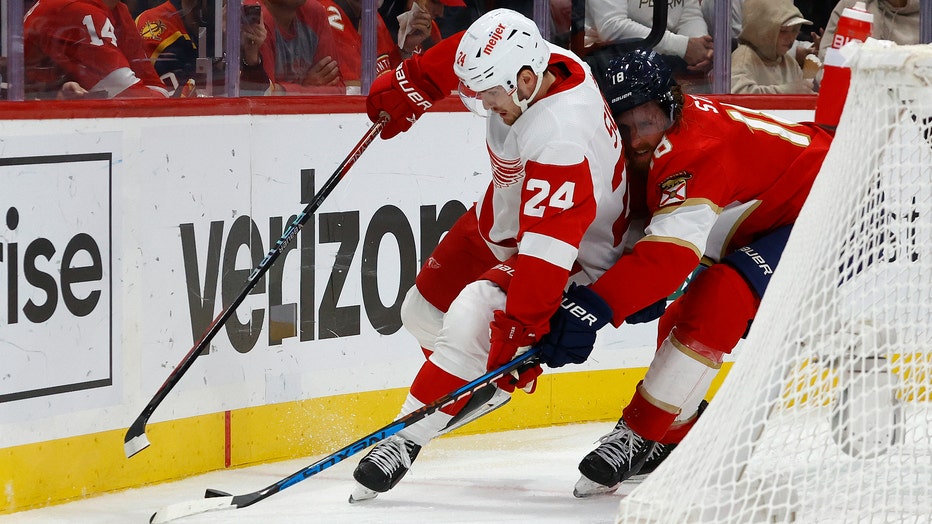 SUNRISE, FL - DECEMBER 8: Marc Staal #18 of the Florida Panthers defends against Pius Suter #24 of the Detroit Red Wings as he circles the net with the puck during second period action at the FLA Live Arena on December 8, 2022 in Sunrise, Florida. (P

Tierney scored with 1:55 left in the first period, Luostarinen made it 2-0 1:47 into the second, and Mahura scored 58 seconds later.

Berggren's goal came at 8:08 of the second to get Detroit within 3-1. Kiersted and Tkachuk scored within a 45-second span for the Panthers later in the period.

Tierney played his 563rd career game. He spent his first four seasons with San Jose and the next four with Ottawa.

The Panthers had their captain back as Aleksander Barkov returned after missing the past two weeks with pneumonia.

Barkov missed the Panthers’ home game against the St. Louis Blues on Nov. 26 as well as the team’s five-game trip.

"He is not just a good player, he is an elite player,’’ Florida coach Paul Maurice said.

NOTES: Panthers center Anton Lundell and goalie Spencer Knight both missed Thursday’s game because of illness. ... Florida was also without defenseman Radko Gudas and forward Patric Hornqvist, both of whom remain in concussion protocol after being knocked out of a game at Seattle on Saturday night. The Panthers have since placed Hornqvist on long-term injured reserve. ... Detroit was without defenseman Olli Maata (illness) and Jake Walman was a healthy scratch.