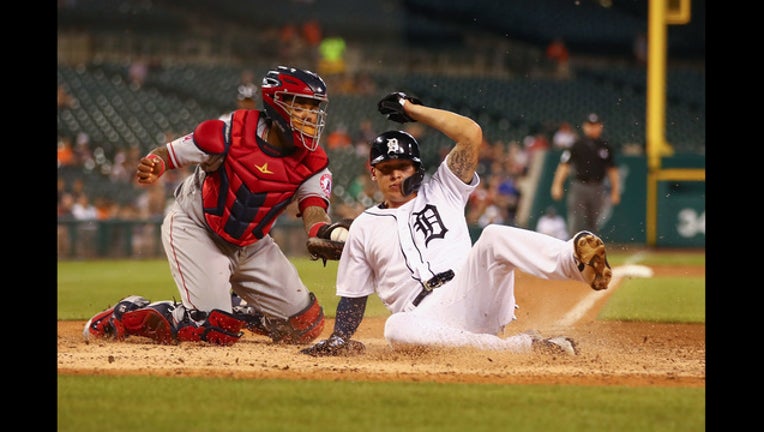 DETROIT, MI - MAY 30: JaCoby Jones #21 of the Detroit Tigers slides past the tag of Martin Maldonado #12 of the Los Angeles Angels to score in the fifth inning at Comerica Park on May 30, 2018. (Photo by Gregory Shamus/Getty Images)

DETROIT (AP) - Shohei Ohtani was rolling along for five innings against the Detroit Tigers on Wednesday night. However, thanks to two rain delays, that's all the Los Angeles Angels got from their young star.

With Ohtani out of the game, Jose Iglesias' two-run single keyed a five-run sixth inning and the Tigers went on to a 6-1 victory.

Ohtani, starting for the first time since May 20th, allowed one run and three hits in five innings. He walked three and struck out five while throwing 83 pitches, including a 101-mph fastball on his final pitch.

"I was ready to go back out there (after the second delay), but the medical staff said it wasn't a good idea," he said through a translator. "This is my first time experiencing something like this, so I had to listen."

Ohtani gave up a run in the first inning on two walks and a two-out single, and settled down after that.

"It might have been the humidity - I was sweating, so I thought I was ready, but I guess not," he said. "I saw 91 on the board, and I knew something was wrong. I haven't thrown a 91 (mph) fastball since high school."

Detroit's Nicholas Castellanos went 2 for 3 with two doubles against Ohtani, but was still impressed.

"He's got a powerful arm and good stuff," he said. "He was already throwing hard, but he hit 101 to Jeimar (Candelario) in a big spot in the fifth. Not a lot of guys can do that."

Tigers starter Mike Fiers was also knocked out by the second rain delay in the top of the sixth, allowing one run and seven hits in 5 2/3 innings.

The Tigers quickly took the lead in the bottom of the sixth, loading the bases against Cam Bedrosian (1-1) on a single, a walk and a hit by pitch. Greyson Greiner struck out, but Iglesias lined a two-run single to center to put Detroit ahead 3-1. Dixon Machado grounded to short, but Andrelton Simmons' throw to the plate was too late to get JaCoby Jones.

Leonys Martin and Castellanos followed with RBI singles off Jim Johnson to push the lead to 6-1.

"This is a big win for us, because we've won two out of three against a really good team," Castellanos said. "Now we can go for the series win tomorrow."

Iglesias sustained a hip contusion while sliding home, and sat out the final three innings.

"I just banged - I don't think it will be serious," he said.

"I don't know if it was rust, I think he was just getting into a rhythm," Angels manager Mike Scioscia said. "He's had some games this year like that, where he's getting a feel for his pitches early on."

The Angels tied it in the third when Albert Pujols' two-out single drove in Mike Trout.

Ohtani, who was throwing 91-mph fastballs in the first inning, hit 98 on his final pitch of the third to retire Victor Martinez on a soft liner to shortstop.

"That's a very talented young man," Tigers manager Ron Gardenhire said. "He was throwing 90, 91 and then he reached back for 98 when he needed it."

The game was delayed for 23 minutes by rain at the end of the fourth inning, but both starters stayed in the game.

Ohtani walked Martin with two out in the fifth and allowed a double to Castellanos before getting Candelario to ground out on a 101-mph fastball.

The game was delayed again by rain in the top of the sixth, this time for 41 minutes. Coleman replaced Fiers to get the last strike of the sixth, and Bedrosian came in for Ohtani.

A Canada Goose settled into right-center field during the second rain delay, and an attempt to remove it ended in chaos. After the grounds crew set off two firecrackers and another member gave chase, the bird tried to escape, but crashed into an LED board on the fa?ade of the third deck and fell two levels into the stands.

After several moments, a veterinarian who was attending the game wrapped the stunned goose in a blanket and took it to the concourse, where it was released outside the stadium and dashed into nearby bushes.

Angels: Zack Cozart (forearm tightness) was a late scratch from the Angels' lineup. . Scioscia said he would talk to Ohtani Thursday morning to decide on his availability to hit in the series finale.

Carpenter (0-1) starts for the Tigers on Thursday against Angels LHP Andrew Heaney (2-3) in the finale of the four-game series.