DETROIT - DETROIT (AP) — Tony Finau and Taylor Pendrith are in a Detroit duel.

Finau shot a 7-under 65 on Saturday to match Pendrith at 21-under 195 with a round left in the Rocket Mortgage Classic.

"If we put together a good round, might be a two-man race," Finau said.

The 3M Open winner last week in Minnesota, Finau is trying to become the first to win consecutive regular-season tournaments in three years. 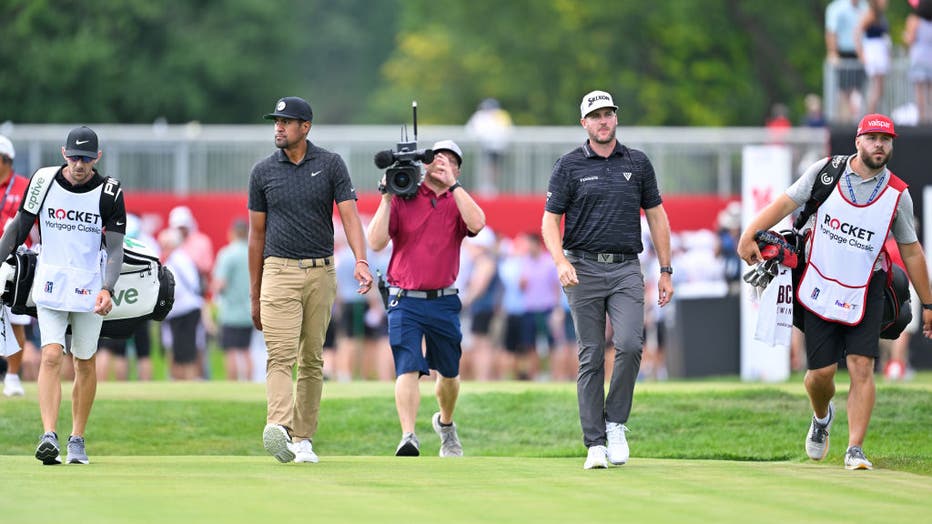 DETROIT, MI - JULY 30: Tony Finau and Taylor Pendrith of Canada walk along the 16th tee box during the third round of the Rocket Mortgage Classic at Detroit Golf Club on July 30, 2022 in Detroit, Michigan. (Photo by Ben Jared/PGA TOUR via Getty Image

"I probably have more pressure just because I’ve never won before and Tony’s a multiple winner and he won last week," said Pendrith, who was a stroke a ahead entering the round and birdied four of the last five holes for a 66.

Pendrith had third-round lead by three shots last October at the Bermuda Championship before closing with a 76 and finishing a career-high fifth. In March, he was 13th at the Players Championship and came away with a career-best $327,222 payday — and a broken rib.

Rookie of the year front-runner Cameron Young (65) was four strokes back. He matched the Detroit Golf Club record with a 63 on Friday.

"I have to play a ridiculous round of golf to have any chance," Young said.

Stephan Jaeger was five shots back after a 65.

Patrick Cantlay, No. 4 in the world ranking, was six shots behind after a 66.

"I’ve got to get off to a hot start and keep the pedal down," Cantlay said. "Obviously, this golf course has no defense and there’s going to be a ton of birdies out there."

Pendrith was the second-round leader after setting the tournament 36-hole record at 15-under 129. The 31-year-old PGA Tour rookie from Canada missed nearly four months this year with a broken rib.

All afternoon, Pendrith and Finau took turns pulling and falling into ties and taking leads.

"It’s almost like a match play situation where we kind of flipped the script there on each other in the beginning," Finau said. "We both have done a great job up to this point through 54 holes of maintaining our composure."

Pendrith opened with 6-foot birdie putt to take a two-shot lead. Finau pulled within a stroke on the next hole, making a 20-foot chip from the greenside rough for birdie.

"Stay hot, Tony!" a fan shouted at a player without a bogey this week.

Pendrith, who had his share of fans make the 4-hour drive from in Ontario, looked cool as calm as he bumped fists with two young boys as he walked to the third tee.

"It had a nice feel to it, a lot of energy from the crowd and both played some solid golf and kind of feeding off each other," Finau said. "It was nice to have that type of energy."

Finau pulled into the lead with a 15-foot putt at No. 3, then Pendrith pulled his 3-foot putt to miss an opportunity to stay ahead.

"Maybe a little nerves," he acknowledged.

Pendrith followed that up with an errant tee shot to the left on the par-5 631-yard fourth hole that put him in the No. 6 greenside rough, leaving him behind several towering tees in his path. He he hit a shot 104 yards to the hole, an approach within 16 feet and made the putt to restore his one-stroke lead.

Finau equaled Pendrith at 18 under at the turn after making birdies at Nos. 7 and 8 while Pendrith missed a 1-foot putt and make bogey on the ninth hole.

Pendrith ended up behind a tree again at No. 13, forcing him to chip back onto the fairway and leading to a bogey that dropped him him into a second-place tie with Young.

"Just kind of hit a poor tee ball and maybe got a little bit of a bad break right behind the tree," Pendrith said.

Pendrith, who won twice on PGA Tour Canada, bounced back from his second bogey with three straight birdies to pull back into a tie with two holes to play.

"To get three in a row after that was a big momentum boost and obviously set myself up nicely with those three holes," he said.

If Finau can outlast the competition to win Sunday, he will be the first to win two straight regular-season events since since Brendon Todd in 2019.