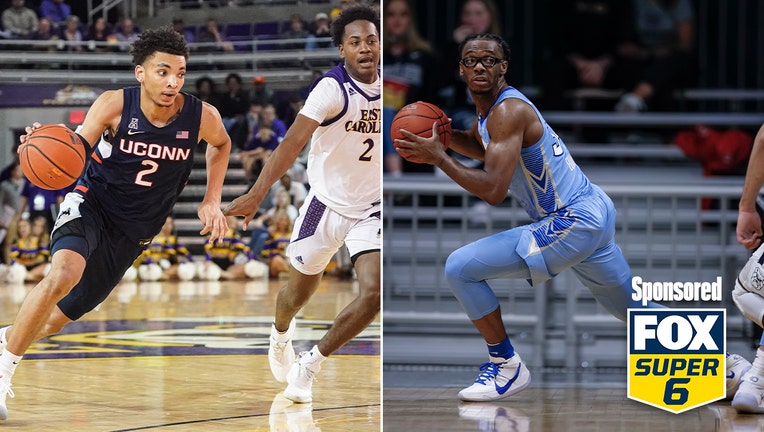 When Connecticut returned to the Big East this year after time in the American Athletic Conference, it was returning to its glorious roots.

What it also did was return to national prominence and new rivalries against newer powers like Creighton. And so, when the No. 23 Huskies head to Omaha on Saturday for a contest against the No. 11 Blue Jays (12 noon ET, FOX), there should be a lot of passion, energy and excitement.

And you could win right along with it with FOX Super 6. Just download the Super 6 app, predict the right answers to the six questions on this game and you could win $1,000. It’s that simple:

Which team will score the last point of the first half?
UConn or Creighton

Creighton has been one of the best teams in the country in the first half of games- outscoring their opponents by a 563-454 margin. (In the second half, Creighton has only outscored its opponents by a 558-501 margin in 14 games.) For the Huskies, the difference is only 319-282 in nine games during a COVID-19 impacted schedule.

UConn is averaging 7.3 3-pointers made per game through the beginning of the season. Creighton is averaging 10 trifectas per game and is allowing 7.6 per contest on average. In other words, the number could be high here.

Like UConn, Creighton has four players who average in double figures. Denzel Mahoney is averaging 15.1 points a game to lead the Blue Jays while Marcus Zegarowski (14.3), Damien Jefferson (13.0) and Christian Bishop (11.5) follow him.

This will be a game of pacing and tempo with Creighton more likely to want to play a higher scoring game. The Blue Jays are more likely to want a game in the 80s – currently, Creighton is averaging 81.1 points a game. For Connecticut, the average is 72.8 per game at this point. That still points to a game at the higher end of the spectrum, however.

Who will win the game?
Connecticut or Creighton with ranges of three or less, 4-9 points or 10 or more.

The Blue Jays are 7-2 at home this year and have traditionally played very tough in the early wakeup window in Omaha. They are, however, coming off back to back losses within conference to Butler and Providence – the last one on Wednesday night at home. The biggest obstacle for the Huskies, however, could be rust. When they take the court on Saturday, they’ll play one game in 13 days at a time of the schedule that normally is packed with three per week.