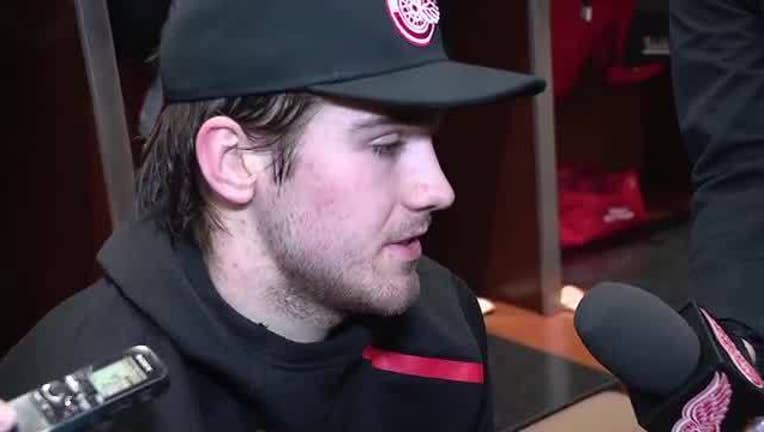 DENVER (AP) - Nathan MacKinnon wiped away a season's worth of overtime frustration with a goal that was critical to Colorado's playoff push.

MacKinnon scored 2:29 into OT and also had an assist to help the Avalanche rally past the skidding Detroit Red Wings 4-3 on Tuesday night.

His 34th goal of the season gave Colorado two valuable points in the Western Conference wild-card chase. The Avalanche kept pace with Dallas and gained a point on Minnesota, which lost in a shootout at Nashville.

Colorado trails Dallas by three points and Minnesota by two. The Avalanche and Wild each have 15 games left, while the Stars have 16 remaining.

The Avalanche came back twice in the final 10 minutes of regulation to send the game to an extra period, where they have struggled. They entered 1-11 in overtime and 1-1 in shootouts but have now won two straight beyond regulation.

"It's just gotten to a point where it's blocking our minds a bit and you don't have that confidence or swagger," captain Gabriel Landeskog said. "But tonight, tying it up twice in the last 10 minutes, there's no reason not to have swagger."

Mikko Rantanen had a goal and two assists for Colorado, and Barrie tied it late in the third period. He also had an assist.

MacKinnon got the winner when he skated into the Detroit zone, got a pass from Rantanen and beat goalie Jonathan Bernier with a wrister from the slot.

"I just shot it. I wasn't aiming for the post or anything, just find the right side," MacKinnon said. "I think it kind of went by his ear so it was an awkward spot to put his hand. It was exciting. It's exciting to finally win one in OT."

The Red Wings have lost eight straight, three in overtime, but appeared poised to win when Filip Zadina put them ahead with his first NHL goal at 17:43 of the third after Colorado was given a minor penalty for too many men on the ice.

"It feels good and hopefully we win some games soon and it will be sweeter," he said.

Zadina, drafted sixth overall last year, was playing in his fourth game since being recalled from Grand Rapids of the AHL.

"He looks like he's a heck of a competitor and a guy who wants to play winning hockey," Red Wings coach Jeff Blashill said. "He's got the right ingredients to be a good player in this league. How good and how quick, you never know. The games he's played up here in so far up he's taken steps in the right direction each game. The biggest key in this league is you've got to keep taking steps forward."

Barrie spoiled Zadina's storybook ending when he scored on a drive from the point 42 seconds later with goalie Semyon Varlamov off for an extra skater.

Niklas Kronwall and Danny DeKeyser also scored for Detroit, and Bernier made 30 saves.

Detroit went up 2-1 early in the third when DeKeyser scored his fourth of the season at 2:22. It stayed that way until Rantanen's goal on Colorado's third power play tied it at 8:30. It was his 29th of the season.

The Red Wings were outshot 5-0 for the first 6:28 but got the first goal of the night when Kronwall's shot from the point hit off Colorado center Sheldon Dries and went through Varlamov's legs at 16:47 of the first period.

J.T. Compher got the Avalanche even when his shot from the slot beat Bernier high at 1:44 of the second. The goal came 26 seconds after Detroit killed off a minor penalty.

NOTES: Detroit LW Thomas Vanek returned after missing three games. ... Varlamov made 20 saves. ... There was a moment of silence before the national anthem to honor Red Wings great Ted Lindsay, who died Monday at age 93. ... Three Avalanche players have connections to the state of Michigan. Ian Cole is from Ann Arbor, Dries is from Macomb Township and Compher played for the University of Michigan. ... Kronwall's goal was his third of the season and first since Dec. 20 at Carolina.

Avalanche: At the Dallas Stars on Thursday night.