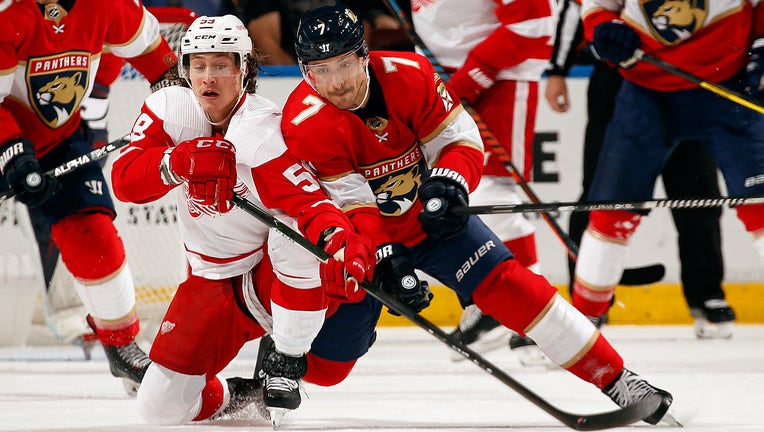 SUNRISE, FL - NOVEMBER. 2: Colton Sceviour #7 of the Florida Panthers tangles with Tyler Bertuzzi #59 of the Detroit Red Wings at the BB&T Center on November 2, 2019 in Sunrise, Florida. (Photo by Eliot J. Schechter/NHLI via Getty Images)

SUNRISE, Fla - Sergei Bobrovsky is having a blast between the pipes for the Florida Panthers.

The veteran goalie earned his first shutout with Florida, and Jonathan Huberdeau had two goals and an assist as the Panthers cruised to a 4-0 win over the struggling Detroit Red Wings on Saturday night.

Bobrovsky, who signed with the Panthers as a free agent in the offseason, stopped 22 shots for his 34th career shutout.

"It was definitely a fun game to play," he said. "I thought our guys did a great job offensively, smart puck management, and defensively they did the smart thing. It was fun to be part of this game, for sure."

Aleksander Barkov had a goal and an assist, and Brett Connolly also scored for the Panthers. Keith Yandle added two assists.

"We didn't give them much and when we did we had (Bobrovsky) in the net," Barkov said. "Very happy for him. He's been unreal for us this season and finally gets the shutout and a lot of confidence from that."

"Everybody was contributing, doing the right things, and Bob did a good job in net as well," coach Joel Quenneville said. "Across the board, it was one of those nights you're pleased."

"There's no doubt we've been fragile," coach Jeff Blashill said. "We better dig in. We control our confidence. We have to learn from this thing and regroup Monday and play a real game."

Huberdeau stretched the lead to 3-0 at 6:45 of the second period when he found the puck at the bottom of the right circle and bounced it off a defenseman's skate into the net.

His second goal made it 4-0 with 9:14 left in the third. Huberdeau pushed in the puck on Bernier's stick side.

The Red Wings mounted little offense and were ineffective on defense most of the game.

"They were a little lost at times," Bernier said. "Our special teams hurt us. We've got to find a way to stop them and score some goals."

Connolly gave the Panthers a 1-0 advantage 3:05 in. After his initial shot hit the post, he grabbed the puck in the right circle and banked it in off the far post.

Barkov's power-play goal made it 2-0. Barkov was positioned in front of the crease and poked in the rebound of a shot by Huberdeau with 3:06 left in the first.

Panthers: Home against the Washington Capitals on Thursday.