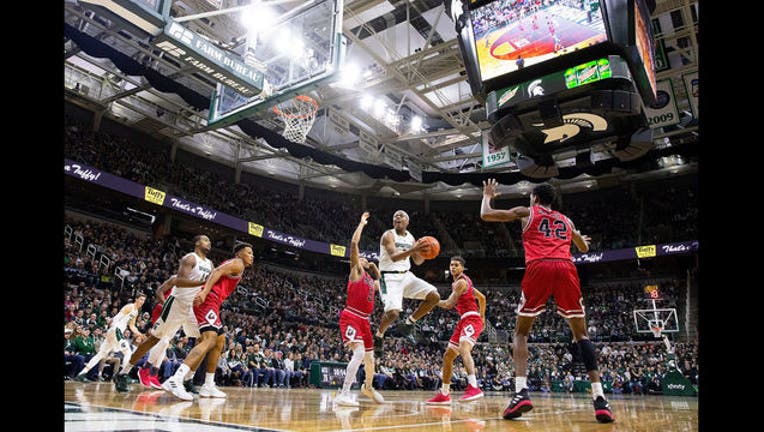 EAST LANSING, MI - DECEMBER 29: Cassius Winston #5 of the Michigan State Spartans drives the lane during the first half of the game against the Northern Illinois Huskies at the Breslin Center on December 29, 2018. (Photo by Leon Halip/Getty Images)

EAST LANSING, Mich. (AP) - Cassius Winston made two 3-pointers in the opening minutes, and it proved to be a preview of what was to come from Michigan State's point guard.

Winston matched a career high with six 3-pointers and scored 24 points, leading the eighth-ranked Spartans to 88-60 win over Northern Illinois on Saturday.

Winston shot 8 of 10 overall, missing only one 3-pointer. He had seven assists without a turnover - the statistic that meant the most to him.

"We got a long way to go to compete in this league," coach Tom Izzo said. "I think there are going be a lot of tight games."

The Huskies (7-6) have alternated between winning and losing for much of the season.

Northern Illinois coach Mark Montgomery returned to the school where he played point guard from 1988-92 and was one of Izzo's assistants from 2001-11.

The crowd cheered when he was introduced before the game.

"It felt great," Montgomery said. "I love the love."

Montgomery was all smiles before tip-off seeing familiar faces at the Breslin Center. He didn't appear to be in a great mood once the game started.

Winston made two 3-pointers in the first 1:34 to help the Spartans take a 9-2 lead, and they kept control enough to lead 43-19 at halftime. Michigan State led by at least 20 during the entire second half.

Eugene German scored 20 points and Levi Bradley had 13 points for the Huskies.

"I don't think we embarrassed ourselves," Montgomery said.

Joshua Langford didn't play in the second half for the Spartans, sitting out as a precaution because of ankle soreness. Langford missed his first six shots and finished with three points on 1-of-8 shooting.

"There's no worry about him from what I've been told," Izzo said. "We decided not to push him."

Northern Illinois: The Huskies have had success this season by taking a lot of 3-pointers and making many of them, including equaling a school-record 14 in the previous game against Chicago State. They entered the game making 52.3 percent of their shots beyond the arc, trailing just Indiana and Gonzaga in 3-point shooting percentage. Northern Illinois made 6 of 23 of its 3-pointers, connecting on just 26 percent. "Credit Michigan State's defense," Montgomery said. "I don't think we were nervous."

Michigan State: The tuneup season is over. The Spartans will get back to Big Ten play in their next game, hosting Northwestern. They won their first two conference games against No. 24 Iowa and at Rutgers. Michigan State is the defending regular-season champion and likely will have to outlast No. 2 Michigan in the 20-game conference season to defend the title.