That was a problem for undermanned UMass Lowell.

Jon Teske had 25 points and eight rebounds, and the 7-foot-1 senior center and his towering teammates created headaches as No. 11 Michigan overpowered the River Hawks 86-60 Sunday to close the nonconference schedule.

“I wanted to take advantage of our size advantage as well as Jon’s skill level,” said Howard, Michigan's first-year coach. “It’s no secret this year I’ve been wanting to establish him in the post to establish our inside-outside game, and today was a good day to continue with that game plan.”

Teske opened each half by scoring the first four points for Michigan, which earned a 41-25 rebounding edge.

The Wolverines (10-3) played their first game without Livers, who entered Sunday as the team’s leading scorer, after the junior forward injured his groin last week against Presbyterian. He's out indefinitely. 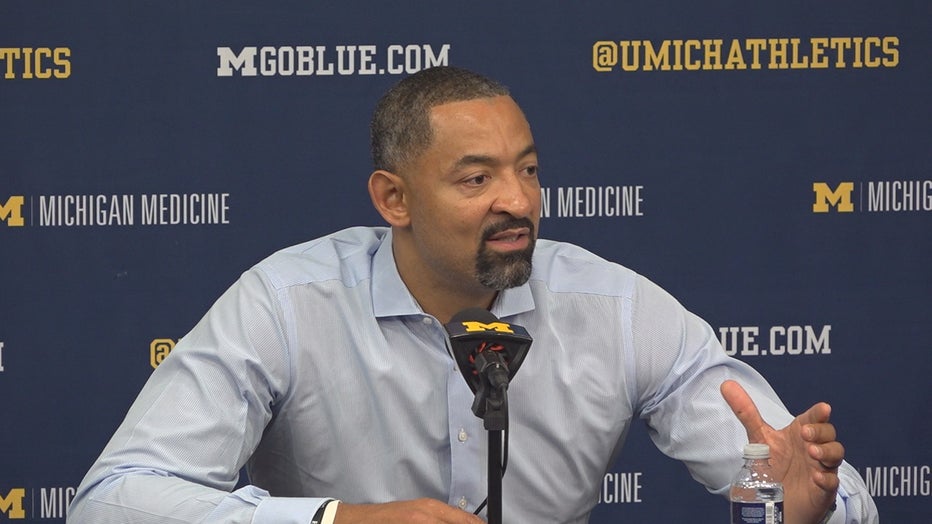 Sophomore Brandon Johns Jr., who is 6-8, got his first start, and Teske and Johns were also teamed at times with the 6-11 Colin Castleton and the 6-10 Austin Davis.

UMass Lowell does not have a player over 6-7.

“We are kind of a big team, so I think it disrupted them a little bit more than other teams would,” Johns said. “There more of a perimeter-based team, so we tried to emphasize closing out on the 3-point line and everything.”

UMass Lowell (6-9) made just four 3-pointers, one off the season low.

Eli Brooks had 15 points, and point guard Zavier Simpson added nine points and 10 assists for Michigan, which never trailed after opening the game with a 10-2 run.

"I knew we were overmatched,” UMass Lowell coach Pat Duquette said. “I didn’t come in here with high expectations, and I’m glad we’re not in the Big Ten.”

UMass Lowell had a chance to pull within 10 points late in the first half, but Obadiah Noel’s layup missed and Brooks nailed a 3-pointer to put Michigan up 42-25 at halftime.

The rout was on in the second half, with Michigan stretching the margin to 32 points.

UMass Lowell: Duquette has a chance at his first winning season in his seven-year tenure with the River Hawks, which started as the program moved into Division I.

Michigan: This was the end of the nonconference schedule for Michigan, which seemed to play powerhouses or pushovers each outing. Getting 10 wins in 2019 was a plus for Howard.

WHERE IT ALL STARTED

The last time these teams met was UMass Lowell’s first game as a Division I program.

Howard downplayed his first foray into the Michigan and Michigan State rivalry, as the Wolverines will open 2020 with a Jan. 5 game at the No. 14 Spartans.

“I don’t even get in to that type of stuff,” Howard said. “Yes, we’re playing against Michigan State, and they’re a very well-coached team, very skilled, one of the best Big Ten teams in the conference, and last year I know we lost three times. I remember seeing that, and I know those guys in the locker room, it still stings them.”

When asked to assess where his team is at after the nonconference schedule ended, Howard wouldn’t play teacher.

“I don’t give grades,” he said. “I”m not a professor or a teacher or anything like that. I like to of course just try to get better game by game.”

UMass Lowell: It’s all America East the rest of the way for the River Hawks, who open conference play Jan. 4 at UMBC.

Michigan: The Wolverines are at No. 14 Michigan State on Jan. 5.