History of the World Cup

How the World Cup became the world's most popular sporting event.

Sunday's final is rich with storylines as the 22nd edition of the World Cup ends with a title match fit for the occasion.

Here are five things to know about the final: 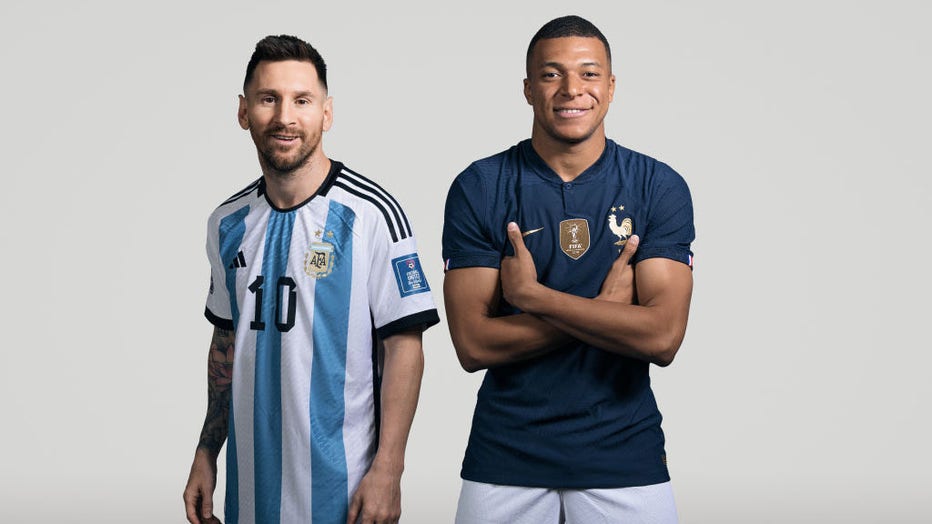 In this composite image, a comparison has been made between (L-R) Lionel Messi of Argentina and Kylian Mbappe of France, who are posing during the official FIFA World Cup 2022 portrait sessions. Argentina and France meet in the final of the FIFA Worl

Is Lionel Messi the greatest soccer player of all time? The debate will rage forever because there can never be a definitive answer. Some — especially younger soccer fans — think so, while others will point to Pelé and Diego Maradona, particularly because they won the World Cup — the sport's ultimate prize. It is why, to many, Messi needs to win the World Cup to join Pelé and Maradona in the pantheon of the greatest ever players, even if deciding who is No. 1, 2 and 3 comes down to individual choice. Argentines would still be split between Maradona and Messi. And there have been striking similarities between them as Messi displays the kind of relentless brilliance and fighting spirit shown by Maradona when leading the team to the title in 1986. Messi is heading into his second World Cup final, having been on the losing team in 2014 when he was contained well by Germany except for one chance that he dragged wide in the second half. Can he seize his chance this time in likely his final appearance on soccer's biggest stage?

RELATED: For Lionel Messi, France is perfect challenge as he chases immortality

Mbappé might not have won the biggest prize in club soccer — the Champions League — but he is taking the international game by storm and is one victory away from winning back-to-back World Cups by the age of 23. He can emulate Pelé's achievement in winning his first two World Cups — not just that but leading the team as its star player. Mbappé is soccer's latest superstar, leading the new wave of talent in the game after 15 years of domination from Messi and Cristiano Ronaldo. It will be regarded as a real baton-passing moment if Mbappé wins the World Cup at the expense of the 35-year-old Messi.

Both Argentina and France are looking to win the World Cup for the third time. It would leave the winning team in outright fourth place on the all-time list, behind Brazil (five), Germany and Italy (both four). Three of Germany’s titles were won by West Germany (1954, 1974 and 1990). A victory for France would rubber-stamp its status as the dominant national team of this generation, with its previous titles coming in 1998 and 2018. Argentina won its titles in 1978 and 1986. Both of the countries won their first World Cup title when hosting the tournament.

Deschamps has already won the World Cup as a player (1998) and a coach (2018), like Brazil's Mario Zagallo and Germany's Franz Beckenbauer. Neither Zagallo nor Beckenbauer won it twice as a coach, though Zagallo did achieve that feat twice as a player to make him a three-time career champion. History beckons, then, for Deschamps, who was an industrious, deep-lying midfielder as a player — once referred to as "The Water Carrier" by French player Eric Cantona because of his ability to stifle attacks from opponents and then pass the ball simply to more creative players around him. Pragmatism is the key to his coaching style as well, with France renowned at both the 2018 and 2022 World Cups for defending compactly, hitting teams on the break and being clinical with its finishing. In Russia four years ago, France averaged 48% possession in matches and averaged six shots on goal per match — the second lowest at the tournament. In Qatar, France — hurt by injuries to key players — might not have been the best team but it is the most efficient. "I'm not the most important person," Deschamps said. "It's the French team."

Four players are in realistic contention to win the Golden Boot, the award given to the top scorer at the World Cup. Of course, Messi and Mbappé are among them. They each have five goals so far, one more than Argentina striker Julián Álvarez and France center forward Olivier Giroud. According to tournament regulations, if two or more players are tied on goals and have played the same number of games, the one with the most assists takes the prize. FIFA's technical study group will decide what counts as an assist. Of the four players in contention, Messi currently leads the way with three assists, one more than Mbappé. No player has scored more than six goals at a World Cup since Brazil striker Ronaldo had eight in 2002.

RELATED: Grant Wahl’s wife reveals his cause of death: 'Nothing nefarious'