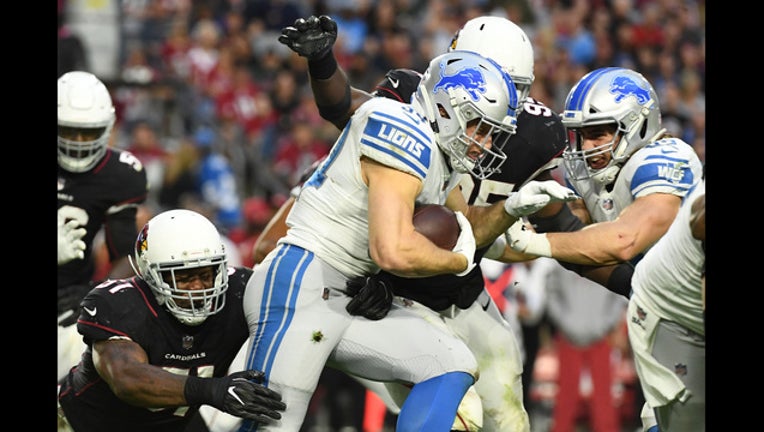 GLENDALE, ARIZONA - DECEMBER 09: Zach Zenner #34 of the Detroit Lions carries in the second half of the NFL game against the Arizona Cardinals at State Farm Stadium on December 09, 2018. (Photo by Jennifer Stewart/Getty Images)

DETROIT (AP) - The Detroit Lions won at Arizona for the first time since 1993, and the game was about as tedious as expected between a pair of also-rans.

For Zach Zenner, though, it was a day to remember.

Zenner was the only offensive player to reach the end zone Sunday in Detroit's 17-3 victory , and he led the Lions in rushing with 54 yards on 12 carries. Detroit is still a longshot to reach the playoffs, but Zenner could have a lot to play for down the stretch. With Kerryon Johnson out injured, Zenner is trying to make the most of his opportunities.

"It's just fun to get to run the ball again. I like running the ball," Zenner said after the game. "Fun to be behind a good offensive line and to have those holes open up like that. Those guys are doing a great job. I really enjoyed the opportunity and let's keep rolling and get a few more wins."

Zenner rushed for 334 yards during the 2016 season for the Lions, but he's played sparingly since then. He hurt his back in this year's preseason finale and was waived in September, but he was back with the team by mid-November.

"I think Zach, again, he's one of those guys that does a phenomenal job of just preparing and being ready to go, whatever the situation is," coach Matt Patricia said Monday. "He goes out and plays a lot of special teams for us and he does a lot of different things that can help us win or can help us win in special teams and also on the offensive side of the ball."

Detroit (5-8) took a 10-0 lead over the Cardinals in the third quarter, when Darius Slay returned an interception 67 yards for a touchdown. The only other TD came on Zenner's 1-yard run with 4:05 left in the game.

The Lions won despite gaining only 218 yards.

"I'm just excited to come away with a win. I think everybody has different views on what they think is exciting from football," Patricia said. "I tend to like the struggle, I like the battle, I like all of it. So, I think back in the day when I was growing up, SEC football used to be like 7-3 and I thought those were exciting, I thought they were great games. So, it doesn't really matter however the game goes, you just have to try to find a way to win."

Detroit quarterback Matthew Stafford passed for only 101 yards, his lowest output since the 2010 season opener, when he left with an injury. The Lions were able to win anyway thanks to their defense - and the contributions of players such as Zenner.