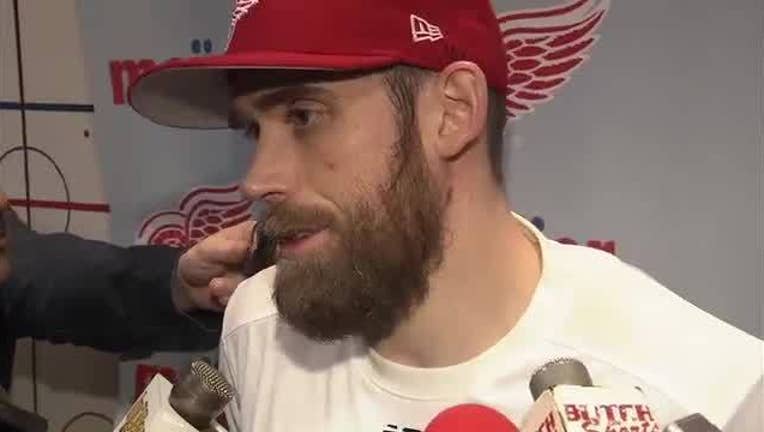 COLUMBUS, Ohio (AP) - The Detroit Red Wings took a lead into the second period for the first time in more than a month and got a big win in their playoff push.

Luke Glendening scored midway through the first period, Henrik Zetterberg and Darren Helm had goals in the third period, and Red Wings beat the Columbus Blue Jackets 3-1 on Thursday night.

Jimmy Howard stopped 27 shots as Detroit moved a point ahead of Philadelphia for the Eastern Conference's second wild-card playoff spot. Howard improved to 12-6-3 in his career against Columbus.

The Red Wings got on the board at 10:23 of the first period when Glendening beat Blue Jackets goalie Sergei Bobrovsky with a drop pass from Andreas Athanasiou. The Red Wings had not had a lead after the 1st period since Feb. 10 — a span of 17 games.

"You always want to score first," Red Wings coach Jeff Blashill said. "Momentum is a big thing. When you score you can build momentum. When you get scored on, you can lose momentum. What we can control is how we play for 60 minutes."

Zetterberg made it 2-0 with his 13th of the season — and team-leading 44th point — at 7:16 of the third period. It was his 309th career goal, tying him with Brendan Shanahan for eighth franchise list.

"He leads on and off the ice," Howard said of Zetterberg. "He always plays a great game for us. Tonight, he was extra special for us, and we are going to need that down the stretch."

Helm gave the Red Wings a three-goal lead with 7:25 left on a soft shot right in front of the Blue Jackets' net, surrounded by three Columbus players. Glendening earned the assist for his second point of the night.

Blue Jackets coach John Tortorella shook up his lines in what seemed a futile attempt to jump-start scoring. Boone Jenner moved to center the top line with Brandon Saad and Cam Atkinson. Brandon Dubinsky also moved from center to wing on the second line with Wennberg and rookie Oliver Bjorkstrand, who was making his NHL debut after being recalled from Lake Erie of the AHL.

The moves finally paid off when Wennberg took advantage of Brendan Smith's hooking penalty and scored his seventh goal. Columbus had last scored since 2:58 of the second period of a home loss to Pittsburgh last Friday. The Blue Jackets were then shut out by Tampa Bay on Sunday.

Bjorkstrand was one of four new players added by Columbus in the past two days. Other roster additions from Lake Erie were Michael Chaput, who last played for Columbus in December, and John Ramage, an emergency recall to replace Dalton Prout, suspended for punching Tampa's Nikita Kucherov.

It was Ramage's first game for the Jackets, with his only other NHL appearance April 11, 2015, with Calgary.

Also added was Justin Falk, an emergency recall for a sick Fedor Tyutin.

NOTES: The Blue Jackets sported a new pre-game look with green St. Patrick's Day themed warm-up jerseys. ... Bjorkstrand is the 12th Danish-born player in NHL history to play in a regular-season game. ... The Red Wings called up G Jared Coreau to fill in for sick backup Petr Mrazek. Glendening's goal snapped a five-game stretch in which Detroit didn't score in the first period.