Historic flooding from torrential rain and rapid snowmelt has forced the National Park Service to close all entrances to Yellowstone National Park through Wednesday at the earliest.

NPS officials said there has been substantial flooding, rockslides and mudslides across numerous roadways after areas picked up at least 3 inches of rain, with some areas seeing a half-foot or more.

That amount of rainfall combined with rapid snowmelt has allowed for the Yellowstone River to rise above levels that haven't been seen in more than 100 years.

The National Weather Service in Billings, Montana, said the Yellowstone River at Corwin Springs is at 13.85 feet, well above the previous record crest of 11.5 feet.

WHAT DOES THE TERM '100-YEAR FLOOD' ACTUALLY MEAN?

Severe flooding in the Yellowstone area on Monday, June 13, left many roads inaccessible in Red Lodge, Montana. (Credit: @Norseman on YT via Storyful)

The NPS said there would be no inbound visitor traffic allowed into the park until the situation stabilizes and officials can begin to assess damage to roads, bridges and other facilities within Yellowstone National Park. 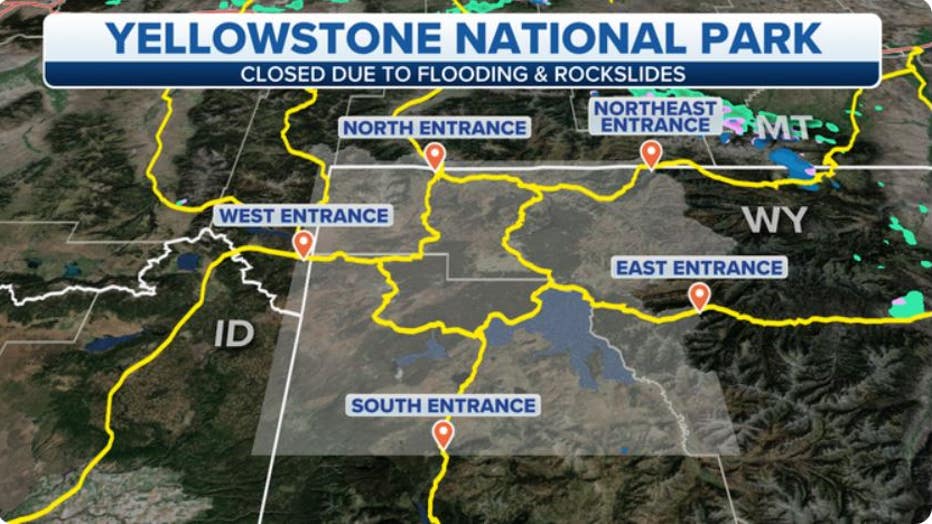 All entrances to Yellowstone National Park are closed. (FOX Weather)

The affected entrances include:

NPS officials said preliminary assessments showed multiple sections of roads have been washed away or covered in mud or rocks, and bridges may have also been compromised due to the flooding.

According to the NPS, several other roads in the southern areas of the park are also on the verge of being flooded.

Roads affected by the flooding, rockslides and mudslides could remain closed for an extended period of time, and the NPS is warning people who are planning on visiting the park in the near future to pay attention to road conditions.

In addition to washed-out roads and bridges, the NPS said power is out in multiple locations within the park.

In a Facebook post, the Park County Sheriff's Office in Montana said U.S. Highway 89 South had been closed between milepost 13 and 15 because of mudslides, rocks and water on the roadway.

There are reports of as much as 4 feet of water over the road between Gardiner and Mammoth, forcing officials to close it to traffic.

Gardiner, Montana is isolated currently by flooding and bridge collapses, Yellowstone NP Superintendent, Cam Sholly posted on Facebook. Much of the area on the northern edge of the park is without power and water. The town is under a boil water advisory after water main ruptured.

Two Montana National Guard helicopters are aiding in search and rescue efforts in Roscoe and Cook City, Montana. The cities are about 50 miles north of Wyoming.

Stillwater County Emergency Services rescued 68 residents from the area around Woodbine Campground by raft. Everyone is accounted for but officials won't be able to assess damage to homes until the water recedes.

PLAN, PREPARE, PROTECT: HOW TO BEST COVER YOUR PROPERTY AGAINST FLOODS 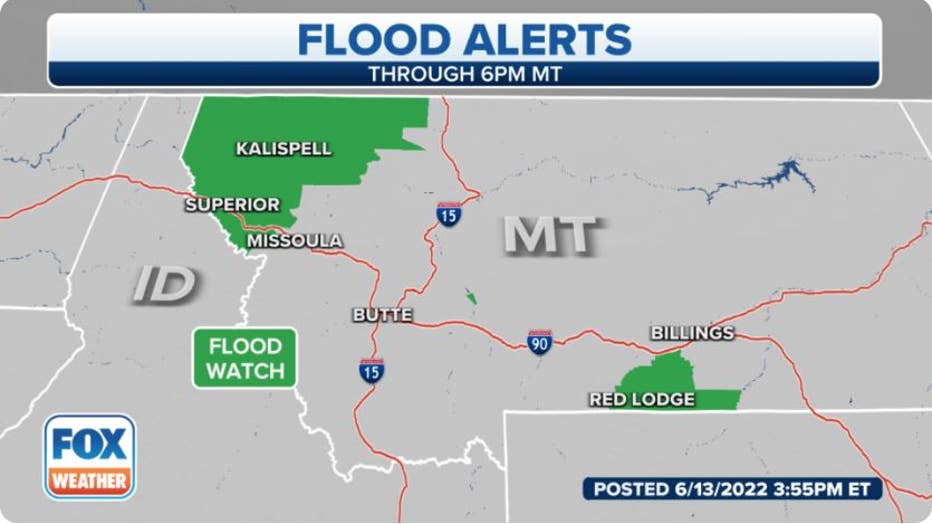 Flood alerts are in effect because of the heavy rain.(FOX Weather)

With the unprecedented amounts of rain and snowmelt in the area, strains on wastewater and water treatment facilities could become a factor, and NPS officials are taking precautions to ensure facilities do not fail.

The NPS, surrounding counties and the states of Montana and Wyoming are working with communities that have been affected by the evolving situation to evaluate flood impacts and to provide support to affected residents.

One of the communities heavily impacted is Red Lodge, Montana.

Water service was temporarily suspended but has since been restored, but officials are warning residents of a boil water advisory out of an abundance of caution.

In addition, town officials said filled and unfilled sandbags are being made available at the County Shop in Red Lodge.