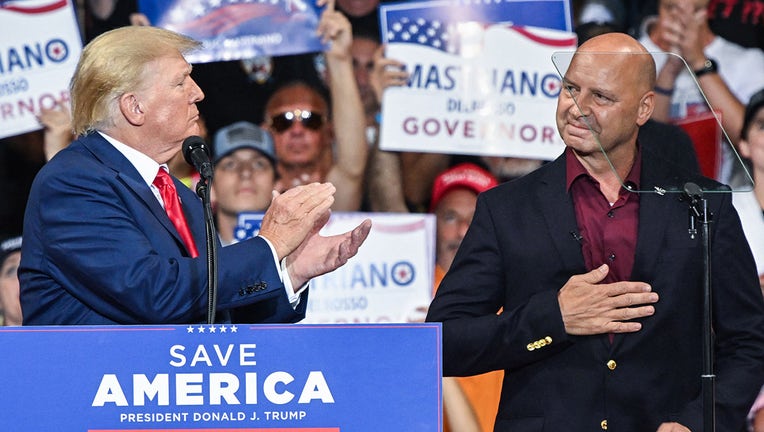 Former US President Donald Trump (L) applauds Pennsylvania gubernatorial candidate Doug Mastriano during a campaign rally in support of Mastriano and Mehmet Oz for US Senate at Mohegan Sun Arena in Wilkes-Barre, Pennsylvania on September 3, 2022. (Ph

Nearly 1 in 3 Republican candidates for statewide offices that play a role in overseeing, certifying or defending elections supported overturning the results of the 2020 presidential race, according to an Associated Press review.

They include contenders from one end of the country to the other, often in pivotal swing states, for positions that are the linchpins of democracy.

In Michigan, Kristina Karamo, a community college professor who signed an affidavit to a lawsuit seeking to throw out President Joe Biden's win, is running to be the state's top elections official. In Arizona, GOP candidates for the three top statewide offices all backed setting aside Biden’s victory in their state.

The breadth of election denial among Republicans is a reminder of the grip that Donald Trump has on the party. As the midterm primary season reaches its conclusion next week, Trump has wielded the power of his endorsement with great effect, lifting candidates who parrot his conspiracy theories while largely sidelining those who accepted the legitimacy of Biden's election.

That's raising the stakes for the November vote, particularly for contests that play a vital role in validating election results and ensuring peaceful transfers of power. Governors, for instance, often confirm the results of presidential elections. Most secretaries of state oversee their state's election system. Attorneys general have the power to defend their state's elections or investigate claims of wrongdoing.

Of the 86 Republican candidates vying for those positions in 37 states in the fall, one-third have echoed Trump's lies about widespread fraud costing him reelection, according to the AP review. Only 40% would directly say Biden was legitimately elected.

"The ball is still in the voters’ court," said Tammy Patrick, a former Arizona election official who works at Democracy Fund, which advocates for election access. "Depending on who they vote for in November, that may not be the case in the future."

There is no evidence of any widespread fraud or manipulation of voting machines in the 2020 election, underscored by repeated audits, court cases and the conclusions of Trump’s own Department of Justice.

The prevalence of candidates who insist otherwise has fueled fears of state officials in 2024 trying to award presidential electors to a candidate who did not win them. But it could also cause disruption and distrust in thousands of other down-ballot races across the country. 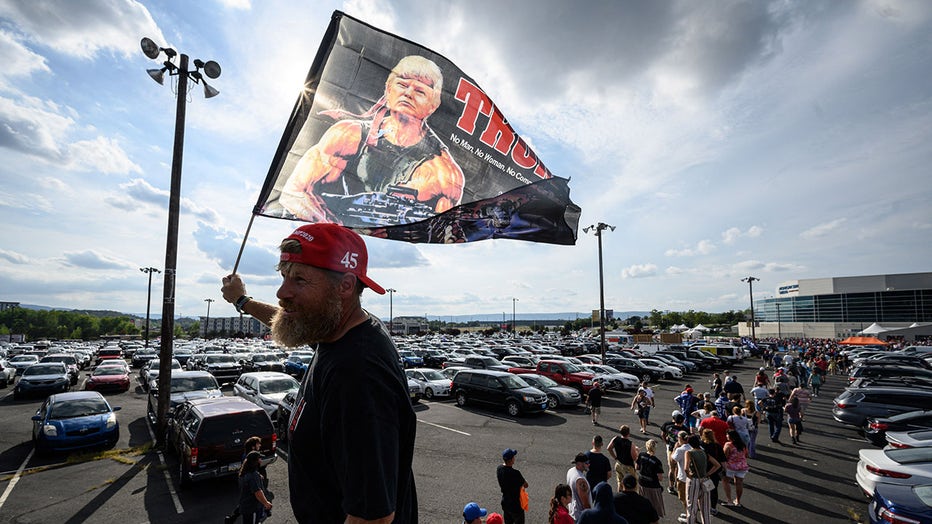 A supporter of former US President Donald Trump holds a flag prior to a campaign rally where Trump will speak in support of Doug Mastriano for Governor and Mehmet Oz for US Senate, at Mohegan Sun Arena in Wilkes-Barre, Pennsylvania, on September 3, 2

RELATED: Biden warns 'equality and democracy are under assault,' urges people to vote

Trump’s falsehoods propelled the attack on the U.S. Capitol on Jan. 6, 2021. Many of the most aggressive candidates see themselves as part of a movement to uncover a grand election conspiracy they blame for Trump's loss.

"We have a fight on our hands," Arizona state Rep. Mark Finchem, the GOP nominee for secretary of state who was at the Jan. 6 protests, told a gathering of several dozen election skeptics in Omaha, Nebraska late last month. "The establishment and the Democrats want to do everything they can to subvert our elections."

That's become an article of faith with much of the Republican electorate. An Associated Press-NORC Center for Public Affairs Research from 2021 showed that 2 out of every 3 GOP voters believe Biden was not legitimately elected president.

Now, in all but one of the battleground states that decided the 2020 race, there is a Republican candidate on the ticket who, like Finchem, has suggested overturning the Democrat's win. The exception is Georgia, where the GOP incumbents beat back a slate of challengers Trump supported to punish them for not awarding the state to him rather than Biden, the actual winner.

In Pennsylvania, state Sen. Doug Mastriano, the Republican nominee for governor, attended the Jan. 6 rally near the White House shortly before the riot and arranged for buses to bring others from his state who wanted to stop Congress from certifying Biden's victory.

In Wisconsin, Trump-endorsed businessman Tim Michels, who is running for governor, said he is open to exploring how to decertify Biden's win in the state — something lawyers say is legally impossible.

In Michigan, the Republican candidates for governor, secretary of state and attorney general have all repeated Trump's election lies.

"If even one or two of these people win, we're in a full-blown constitutional crisis," said Ellen Kurz, a Democrat whose group, iVote, is involved in the swing state secretary of state races.

Other experts on voting are alarmed but warn against panic.

"I don’t want to give them more power than they actually have to undermine us and our faith in the election process," said Sylvia Albert, director of voting and elections for Common Cause, a nonpartisan organization that advocates for expanded voter access. "We have a huge infrastructure with thousands of election officials and checks and balance. In places where there are bad intentions to harm voters, we are all working to ensure those don’t happen."

The candidates' views are important in the key presidential states because a governor or secretary of state with a record of not respecting the actual vote count could introduce chaos into the selection of the next president. Some of the statewide candidates are likely to win in November because they are running in overwhelmingly Republican states.

That includes former U.S. Rep. Raul Labrador, the GOP nominee for attorney general in Idaho, and Alabama state Rep. Wes Allen, the nominee for secretary of state. Both candidates said they would have signed onto a 2020 Texas lawsuit to overturn Biden's win. That case was swiftly thrown out by the U.S. Supreme Court.

In Wyoming, state Rep. Chuck Gray, who won last month's GOP primary for secretary of state, faces no opponent from the Democratic Party or any other group in November in a state that Trump won by 43 percentage points. Gray has repeated Trump's lies about 2020 being "rigged," traveled to Arizona to watch a partisan review of ballots that was derided as deeply flawed and proposed additional regular election audits in Wyoming.

In response to Gray's likely ascension, a committee of the Wyoming Legislature late last month voted to draft a bill that would remove the secretary of state from overseeing the state's elections. Dan Zwonitzer, the Republican co-chairman of the committee, said in an interview that it's likely the Legislature cannot finish the effort this year, but may be forced to consider it in the future.

"It's a little bit of a reaction to the gut punch the state took," Zwonitzer said, noting that the government has been holding numerous open forums and demonstrations of its vote counting to assure the public it's secure.

The pushback in Wyoming is a reminder of that, as Trump has tried to make denial of the 2020 election results a litmus test in his party, many Republican elected officials have refused to go along.

"Democracy is not a partisan issue," said Thania Sanchez of States United Action, an organization tracking candidates who deny the 2020 outcome and are running for statewide office. "A lot of Republicans have been consistent about not spreading the lies about the 2020 election."

Sanchez noted that most statewide GOP incumbents did not outright deny the 2020 outcome or use their positions to try to overturn the election. Many faced primary challengers this year, as in Georgia, but Trump's movement knocked out incumbents in only two races — the Idaho attorney general primary and in Indiana's secretary of state race, where Diego Morales won the nomination at the state Republican Party convention after repeating Trump's fraud claims.

The movement had its greatest success in races for open seats, such as Gray in Wyoming or the race for secretary of state in Nevada. A Republican who defended the 2020 election result was prevented by term limits from seeking reelection, and GOP voters then nominated Jim Marchant, who says he would not have certified Biden's win in Nevada.

Rory McShane is a political strategist who advised both candidates and worked for a coalition of like-minded skeptics of the 2020 result who are running for secretary of state; Marchant founded that group.

McShane said candidates such as Gray and Marchant are being maligned.

"If you criticize or talk about election security, they ostracize you and try to throw you out of the mainstream conversation," McShane said. "That leaves Republicans two choices — to run milquetoast candidates or run candidates willing to stand up to the mainstream media."

Associated Press statehouse reporters from throughout the United States contributed to this report.