Final push for votes for Michigan Governor by Whitmer, Dixon

Governor Gretchen Whitmer and challenger Tudor Dixon spent their last full day on the campaign trail making one last push to get voters on their side.

SOUTHFIELD, Mich. (FOX 2) - Absentee voting has been open for weeks but Election Day is just hours away. Governor Gretchen Whitmer and Tudor Dixon made their final pitches for votes on Monday, the last full day before polls open across the state.

Whitmer and Dixon both were on the campaign trail to get those last-minute votes. Whitmer was in Metro Detroit where she visited Cornbread Soulfood on Northwestern Highway in Southfield.

"We’ve got great energy on the ground our rallies are well attended we have hundreds of people every time we have a rally," Whitmer said. "We’ve had a lot of challenges with the global pandemic but we’ve come out swinging and Michigan is leading now."

Whitmer is pushing for another four years as governor and says voters should choose her to keep the state's momentum moving forward.

"Now is not the time to go backwards whether it’s women’s rights voter rights or any of these important investments from fixing the damn roads to job creation," Whitmer said.

But Dixon said Whitmer's track record is not a win for the state, especially her COVID shut-downs, and the governor's educational programs have failed.

"We know that Gretchen Whitmer’s administration has gone after our businesses small or large they are constantly under attack trying to cite them, shut them down, fine them," Dixon said. "We are in the bottom 10 in the nation (in education). We should not be sleeping until we get our kids educated and make sure they can read."

Whitmer said look no further than what has supported Dixon's campaign.

"She’s bankrolled by Betsey DeVos," Whitmer said. "And make no mistake that if she writing next year’s education budget, she will divert half a billion dollars out of our public schools that will set us backwards that’s why we have to keep moving forward," Whitmer said.

On Tuesday, the campaigns reach their finish line and it will be left to the voters to decide. 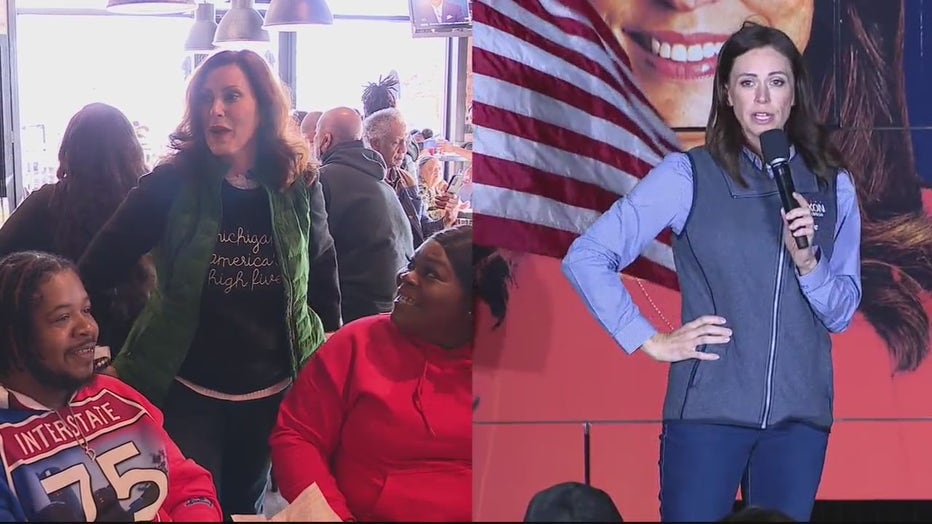