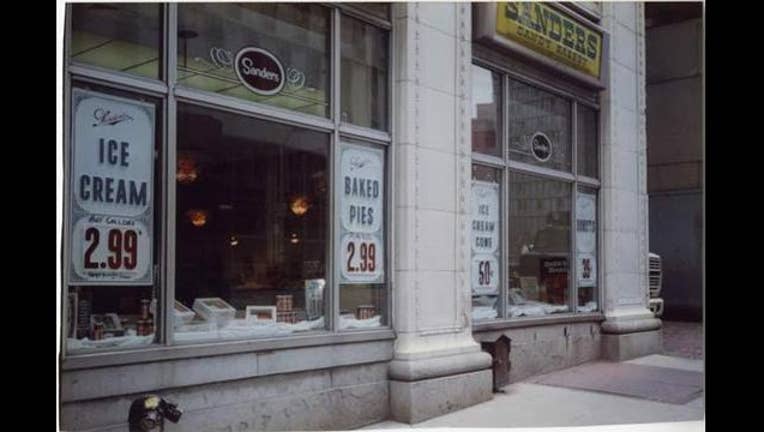 In Downtown Detroit, the storefront remains even though the tenant who once anchored the street level of the Ford Building is long gone.

We're talking about Sanders Cafeteria on the corner of Griswold and Congress. Sure, there's a Jimmy Johns there now but for years, Sanders was the place for ice cream, baked pies, and donuts. All with great prices, by today's standards.

So how did this staple start? It actually started in Chicago. In 1871, Frederick Sanders Schmidt's original soda fountain and candy store was destroyed by the Great Fire. In 1875, he moved to Detroit to set up his single candy store on Woodward and Gratiot. Business grew and he introduced ice cream, sodas and the aforementioned baked goods.

In 1876, he supposedly invented ice cream soda. As the story goes, according to the Detroit Historical Society:

"One evening during the summer of 1876, Sanders ran out of fresh cream for his cream sodas. In an effort to please the store full of eager customers, he used a scoop of ice-cream instead. His patrons were thrilled with the taste and word of the new beverage spread. The substitution of ice cream for regular cream became a customary offering at soda fountains and stores throughout the nation."

You may have also heard of a little something else Sanders is famous for: Sanders Bumpy Cake. The sweet treat has delighted generations and passed from family member to family member. Thanks to the Morley Candy Company, you can still get Bumpy Cakes today!

In the 1980s, major changes came to Sanders due to a poor financial situation. Eventually, the Cafeteria and other lunch counters were forced to close. 20 years later, Morley Candy Company swooped in to bring back the Detroit favorite.

Today - you have to look around Metro Detroit and even drive up to Mackinac Island to find one, but believe us, they're still here.