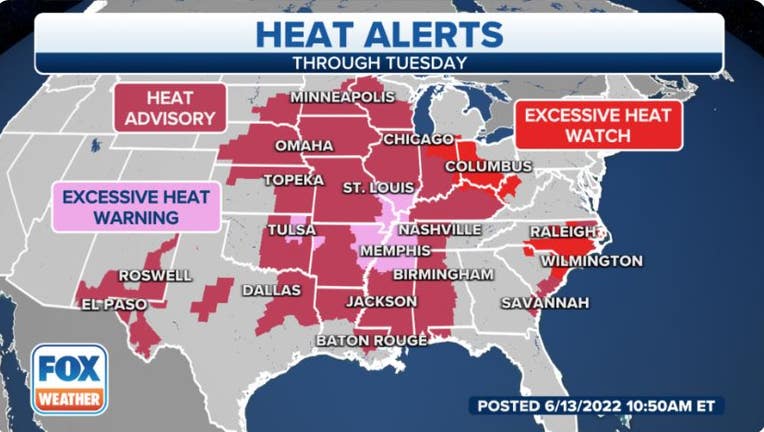 More than 106 million Americans in 24 states are under a heat alert.(FOX Weather)

More than 100 record-high temperatures are in jeopardy of being broken this week as a dangerous heat wave continues to expand, putting 106 million Americans in two-dozen states at risk of heat-related illnesses.

The National Weather Service says heat is expected to persist for the next few days, with well-above-average to record temperatures expected from the central and southern Rockies across the Plains and into the lower and mid-Mississippi, Tennessee and lower Ohio valleys.

And as the heat index is expected to easily reach above 100 degrees in many parts of the country, Heat Advisories, Excessive Heat Warnings and Excessive Heat Watches have been posted across most of the eastern Plains states, the lower and mid-Mississippi Valley, the Ohio Valley the lower Tennessee Valley and the central Gulf Coast.

The NWS says a strong area of high pressure will begin to build over the Tennessee Valley, which will also allow the heat to begin to build up in the Carolinas. 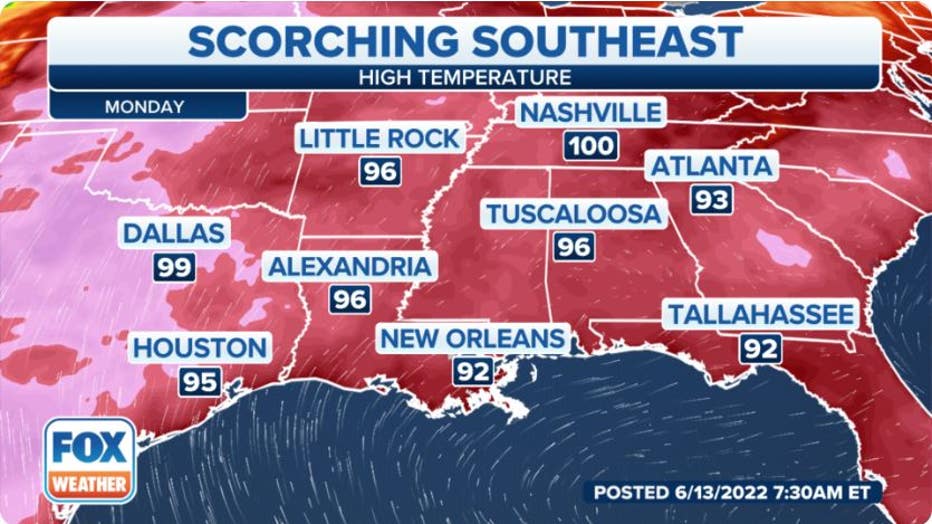 Check out these high temperatures in the South on Monday.

It will get into the mid- to upper 90s across the region from Dallas and Houston and along the Gulf Coast into the Mississippi and Tennessee valleys, as well as the Southeast.

Nashville, Tennessee, will see a high temperature of about 100 degrees, but it will feel even hotter when you factor in the heat index. 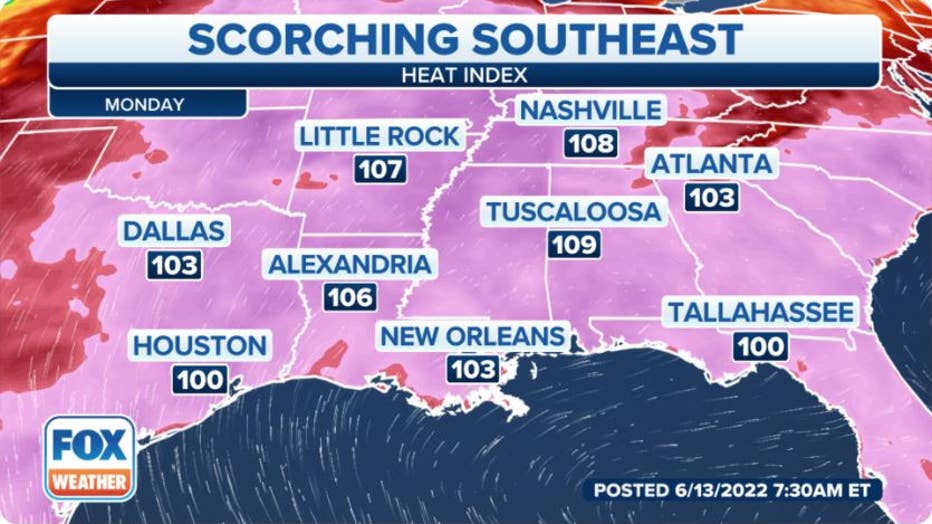 It will feel like 110 degrees or higher across the region on Monday. (FOX Weather)

Even though the temperatures across the region will be at or near 100 degrees, it will feel even hotter.

Nashville and Tuscaloosa, Alabama, will feel like it's about 100 degrees.

HOW THE WEATHER YOU'RE ACCUSTOMED TO AFFECTS NATIONAL WEATHER SERVICE HEAT WARNINGS, ADVISORIES 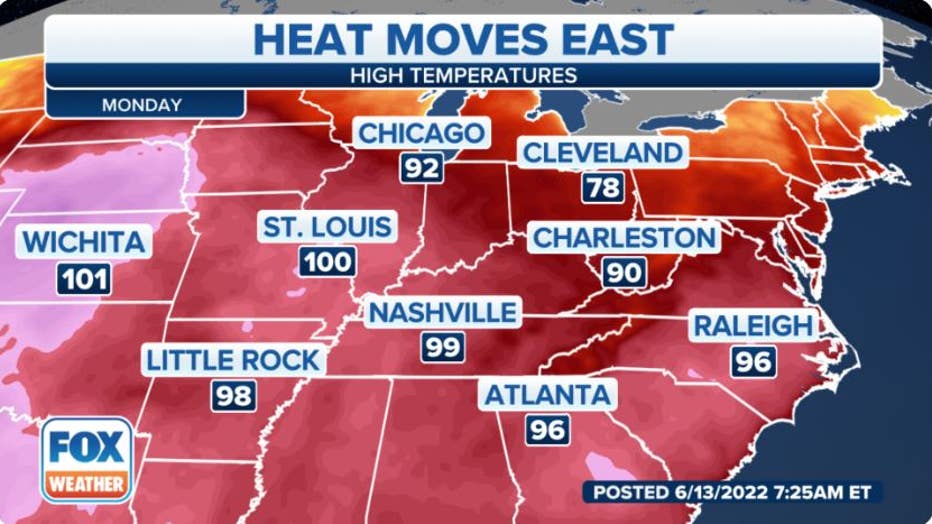 St. Louis is expected to get to around 100 degrees on Monday, with other major cities like Nashville and Atlanta also getting close to the century mark.

WHY CRIME HEATS UP DURING THE SUMMER

Closer to the East Coast, temperatures will also get into the upper 90s by Monday afternoon.

Heat alerts are in effect in the Carolinas, where cities like Raleigh, North Carolina, will get to about 96 degrees.

HOW TO TELL THE DIFFERENCE BETWEEN HEAT EXHAUSTION AND HEATSTROKE

When this dangerous heat arrives, it'll be imperative to take the proper precautions to stay cool and stay safe.

First off, try to limit the time spent outdoors during excessive heat. The best time to be outdoors would be early in the morning or later in the evening. 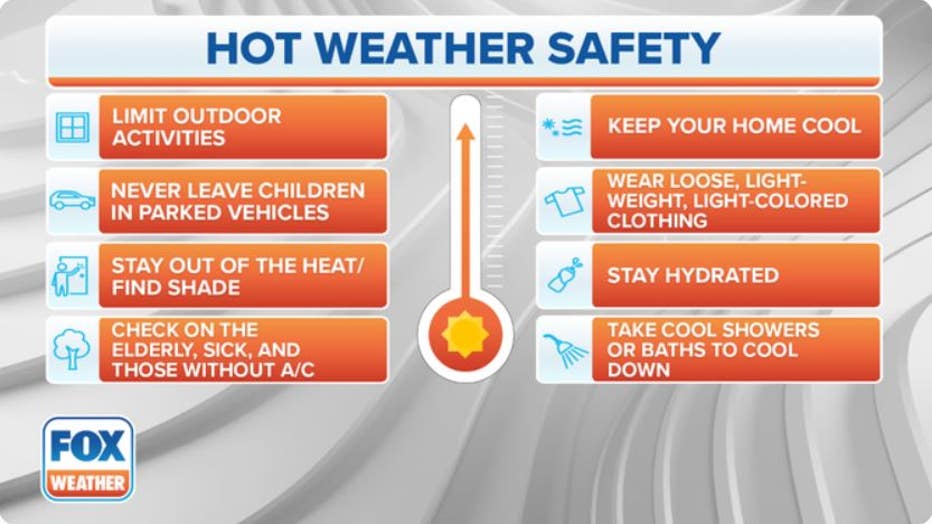 If you need to go outdoors during the day, wear loose, lightweight and light-colored clothing and drink plenty of fluids.

Always "look before you lock" to ensure you have not left any children or pets inside a car. Temperatures inside a locked vehicle with the windows rolled up can be deadly.

Track the temperatures in your area with the FOX Weather app. The free FOX Weather livestream is also available 24/7 on the website and app and on your favorite streaming platform. The FOX Weather Update podcast also provides weather information for the entire country.