In response to those recent issues, the district sent letters to parents, held training for staff, and hosted a community meeting to discuss race issues. But attorney Leonard Mungo says there are repeated incidents of racist behavior – like a Black doll hanging in a commons area at the school.

BLOOMFIELD HILLS, Mich. (FOX 2) - It’s been an intense couple of weeks for Cedric McCarrall, and his 15-year-old daughter at Bloomfield Hills High School - a sophomore, and leader in the Detroit Youth Choir. Her joyous spirit, stifled.

"She said 'Why is all of this happening, I don't understand why this is going on -  I’m a good person,'" McCarrall said. "For me seeing my daughter waking up in cold sweats, saying she had a dream that 'White men were chasing me ... they were trying to kill me.'"

Cedric and his attorney Leonard Mungo filed a $150 million lawsuit against the school, principal and district superintendent, saying they have not done enough to stop the racism.

Students held protests after racist graffiti was found twice in the school, reported by the same female student. Both of them had similar threats – saying "Kill all (racial slur)' written on the bathroom wall.

"I have not seen this kind of gross and flagrant expressions of racial hatred than to kill children because of their race," Mungo said.

The heat is on the district calling for things to cool down, choosing to do virtual learning instead of in-person for the days before Thanksgiving break.

In response to those recent issues, the district sent letters to parents, held training for staff, and hosted a community meeting to discuss race issues.

But  Mungo says there are repeated incidents of racist behavior – like a Black doll hanging in a commons area at the school.

"You can't threaten people’s lives and then get a slap on the wrist -- we have seen this time and time again in America," McCarrall said.

They will be amending that suit – so that if and when someone is found responsible for making those threats, they will go after them, and their families.

A spokesperson for Bloomfield Hills High School released this statement:

"This transition allowed the District and building administration to gather with high school staff for professional development and an open dialogue on recent incidents at the school. In addition to informing staff on incident details, faculty reviewed materials from Learning for Justice and shared their thoughts on the District’s largest challenges.

"Our work, along with further reflection, rest and healing, will continue tomorrow, as our faculty prepare for reentering their classrooms with students next week. We’ll also review additional materials from Learning for Justice and resources about recognizing bias in the classroom. We know the District will emerge stronger and better as a result of these conversations, undeterred from its commitment to all students and facilitate a school environment of safety and support for every student." 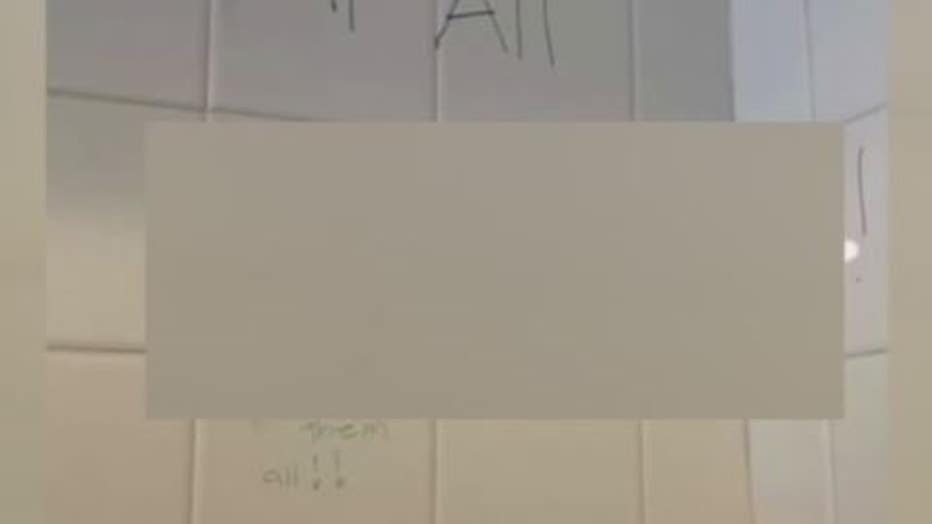 Photo of one of the racist graffiti messages found at Bloomfield Hills HS.