DETROIT (FOX 2) - Detroit Police said two people were killed during a home invasion in Detroit Monday. Of those killed is one of three responsible for the home invasion and someone who was inside the home.

Detroit Police and firefighters were called to two different locations just a couple blocks away. The first place was a home on Santa Rosa where the home invasion took place.

Chaotic crime scene leaves two dead, one by gunshot and the other by stabbing near Livernois and Seven Mile

Detroit Police spent hours at a crime scene after three men broke into a home, shooting inside. The bullets hit one teen and grazed another. One of the suspects was stabbed in retaliation and would later die after the three tried getting away. They attempted to drive to the hospital but only made it a mile before crashing into another car and ricochetting into a tree.

According to Detroit Police Captain Derrick Maye, three people broke into the home, pulled a gun, and shot a 17-year-old inside.

"Upon forcing entry into that location, one person produced a handgun and shot one of the residents inside the location," he said.

During the shooting, one of the people inside stabbed of the other three in the neck.

The man who was stabbed was pronounced dead.

According to Maye, the 17-year-old who was shot inside the home was also taken to the hospital and later pronounced dead.

One other person was shot but is expected to survive, Maye said.

Police arrested one suspect at the scenes and say another suspect is still on the run.

"It's very difficult but we are the Detroit Police Department and we have experience in dealing with things like this. Officers did an excellent job of containing both scenes and identifying witnesses," said Maye.

Maye would not provide a motive for the home invasion and violence, saying it is still an open investigation. 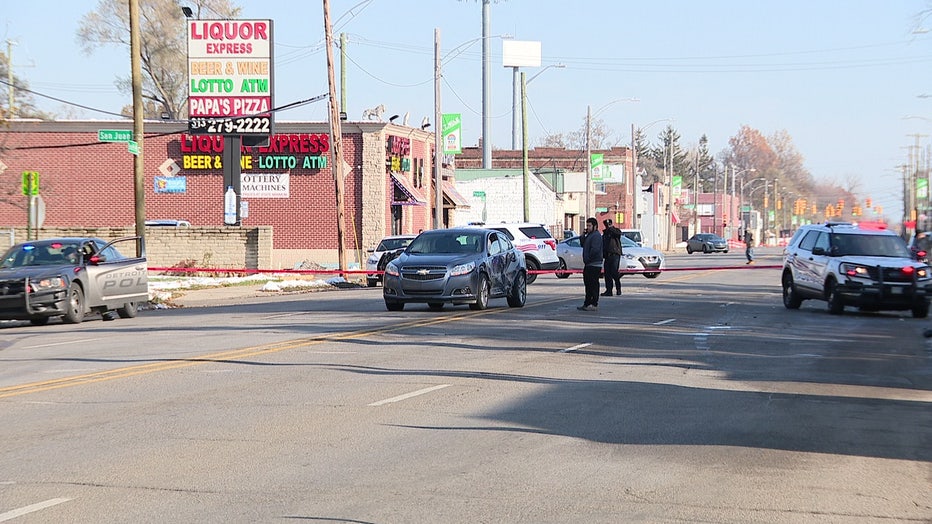