DETROIT (FOX 2) - Take a good look at the men police say gunned down a 19-year-old man and injured a teenage girl on Detroit’s west side Tuesday afternoon.

It happened at the Marathon gas station on Grand River near Shiawassee around 4:15 p.m.

Take a good look at the men police say gunned down a 19-year-old man and injured a teenage girl on Detroit’s westside Tuesday afternoon.

"It was like five or 10 seconds after I came from the store, I just heard about five or six gunshots - pow, pow, pow pow, pow," said Armani Clark. "I just looked out the window and I saw a bunch of people running. I ended up seeing somebody get picked up, a girl get picked up. They went to the truck over there and then all I heard was, 'He’s dead. He got shot in the head, he’s gone.'"

Police say the 19-year-old man killed was pumping gas when two to three cars approached him.

"One person got out of one of the vehicles, they had some words and the person that was pumping the gas, tried to get back into the vehicle and a gentleman from one of those vehicles fired several shots hitting the male," said Cmdr. Darrell Patterson, Detroit police.

Police say the gunman left the scene and headed east on Grand River in a black Grand Cherokee. 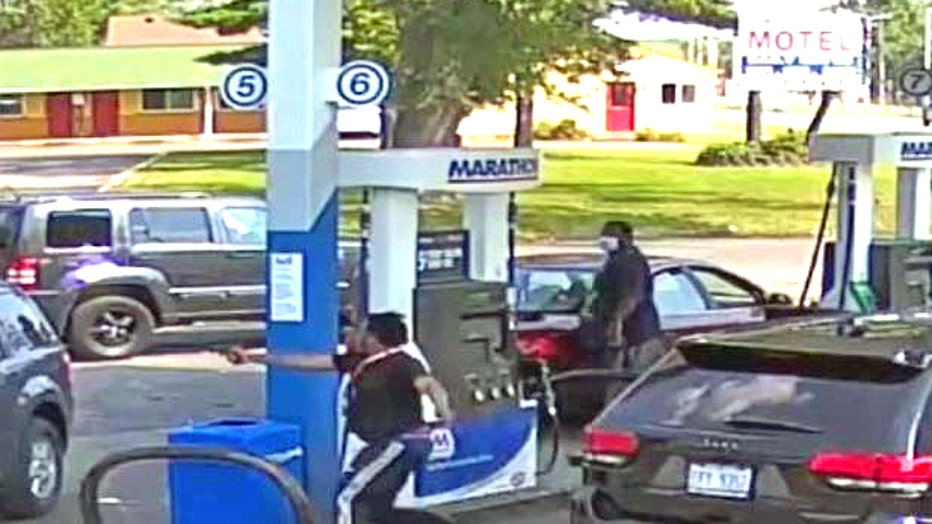 Detroit police released video of the shooter at the west side Marathon on Grand River.

The murder and shooting in broad daylight are one of the latest acts of violence in the city.

Three people were shot at a motel on the west side Tuesday morning.

Three teens were struck by gunfire at a youth football game Sunday-after police say two groups with no connection to the game got into a shootout over a beef on social media.

The investigation into the murder at the Marathon gas station is ongoing.

Patterson says one thing is clear.

If you have any information on who the shooter is, call Crime Stoppers at 1-800-SPEAK-UP, you will remain anonymous.