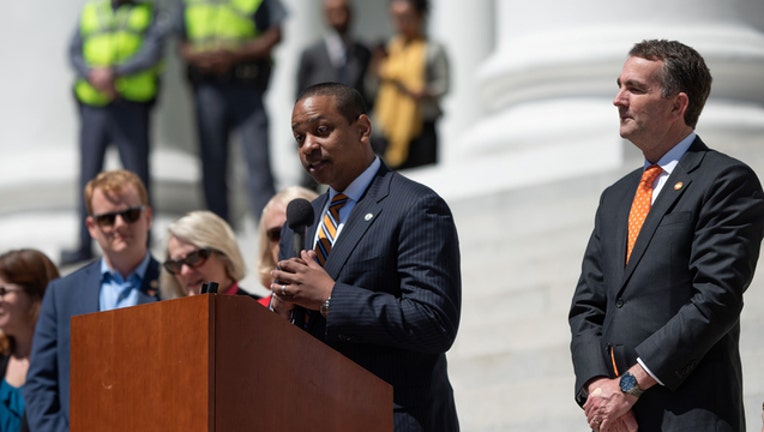 WASHINGTON (AP) - A second woman accused Virginia Lt. Gov. Justin Fairfax of sexual assault Friday, saying the Democrat raped her 19 years ago while they were both students at Duke University.

Calls for his resignation grew steadily as the day wore on.

A lawyer for Meredith Watson, 39, said in a statement that Fairfax had attacked Watson in 2000. The statement described the assault as "premeditated and aggressive," and noted that while Watson and Fairfax had been social friends, they were never involved romantically.

The lawyer, Nancy E. Smith, said her team had statements from former classmates who said Watson had "immediately" told friends that Fairfax had raped her. A New Jersey public relations firm representing Watson provided The Associated Press with a 2016 email exchange with a female friend and 2017 text exchanges in which Watson said Fairfax had raped her. She also expressed dismay about his run for political office.

Watson's representatives declined to provide further documentation and said their client would not be talking to journalists.

Fairfax shot back at his accusers quickly: he said in a statement that he would not resign from office, and vowed to clear his name against what he described as a "vicious and coordinated smear campaign" being orchestrated against him.

Police officials in Durham, North Carolina, where Duke is, said they had no records of an accusation against Fairfax in 2000.

This is not the first time Watson has accused someone of assault. Following inquiries from AP and other media, Watson's lawyer confirmed that while in college she accused another man, a basketball player at Duke, of raping her when she was a sophomore. Smith said Watson reported it to a top-level university administrator but received no help and was discouraged from taking the claim any further. The lawyer said Watson also told friends - including Fairfax - about the earlier incident.

Duke officials told AP on Friday they had no immediate knowledge of the accusation against the basketball player but were researching the matter.

The latest accusation against Fairfax comes two days after Vanessa Tyson, a 42-year-old political science professor, said publicly that Fairfax sexually assaulted her in a Boston hotel room during the 2004 Democratic National Convention. Tyson says Fairfaix, then a law student working as an aide to Democratic vice-presidential nominee John Edwards, forced her to perform oral sex.

Fairfax says his sexual encounter with Tyson was consensual.

At the time, Tyson was working as a student adviser at Harvard University and was a frequent speaker to Boston-area support groups for rape survivors. Tyson has said she was sexually molested by a family member as a child.

A man who was romantically involved with Tyson in the late 1990s said Thursday that she disclosed the childhood abuse to him during a conversation about why she found certain kinds of physical intimacy difficult. The man spoke to AP on condition of anonymity out of concern publication of his name would damage his career.

He said Tyson told him oral sex in particular brought back painful memories of her childhood trauma. The man said he finds it nearly impossible to believe that Tyson would have performed oral sex without being forced.

Though the man also knows Fairfax and considered him a friend, he said he believes Tyson is telling the truth.

The Associated Press typically does not identify those who say they were sexually assaulted, but both Tyson and Watson issued public statements using their names.

Tyson said Wednesday the 2004 incident left her feeling deeply humiliated and ashamed. She only began to tell friends about the alleged assault in October 2017, after seeing a photo of Fairfax next to an article about his campaign.

Watson also confided in a friend after seeing that Fairfax was running for office. Watson, who now lives in Maryland, did so after she received an email from a college friend in 2016 urging former Duke students to support the campaign of "our good friend Justin."

Watson replied: "Justin raped me in college and I don't want to hear anything about him. Please, please remove me from any future emails about him please. Thank you!"

Watson's lawyer said the circumstances of the alleged assault in 2000 were similar to what Tyson had described happening four years later, but declined to provide further details.

"At this time, Ms. Watson is reluctantly coming forward out of a strong sense of civic duty and her belief that those seeking or serving in public office should be of the highest character," Smith said, according to the written statement. "She has no interest in becoming a media personality or reliving the trauma that has greatly affected her life. Similarly, she is not seeking any financial damages."

Carliss Chatman, a Washington & Lee Law School professor who graduated from Duke in 2001, said she has remained friends with Fairfax and hosted a political fundraiser for him. She remembers Watson from parties but didn't think Watson and Fairfax ran in the same social circles and was surprised that the statement from Watson's attorneys had described them as friends.

"It doesn't feel plausible at all," she said of Watson's allegations.

The accusations against Fairfax have rocked an administration that was already struggling amid calls for the resignation of Virginia Gov. Ralph Northam over a racist photo that appeared on his 1984 medical school yearbook page. Fairfax would be in line to become governor if Northam resigned.

Following news of a second accuser against Fairfax, Democratic state lawmakers in Virginia issued a call for Fairfax to resign, as did the Virginia Black Legislative Caucus. Several members of the state's congressional delegation, both black and white, also said Fairfax, who is black, can no longer serve in the office.