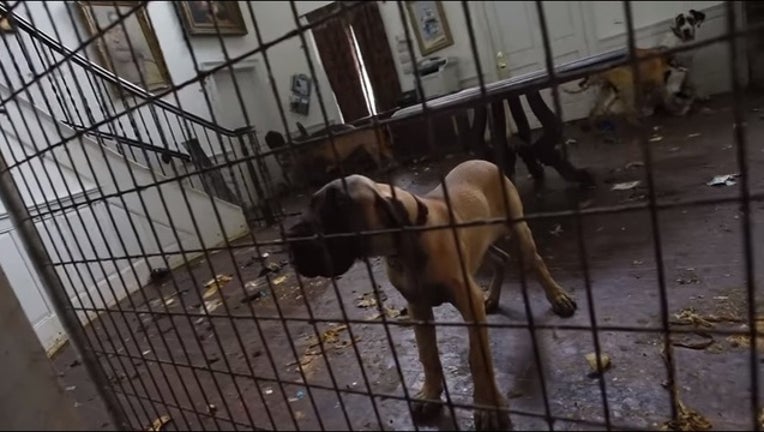 WOLFEBORO, N.H. (WJBK) - It was a true house of horrors for a New Hampshire police department and the Humane Society when a suspected puppy mill in Wolfeboro, New Hampshire, was discovered with 84 Great Danes found living in unsafe and unsanitary conditions.

According to the Humane Society, the Wolfeboro Police Department served warrants Friday morning when they found the dogs. The Humane Society says the police department has dealt with the owner of the residence before regarding barking dog complaints and an investigation was started in May on accusations of animal neglect.

Responders said they found the 84 Great Danes living in squalid conditions with limited access to food or water. They said the dogs were sliding on their own feces while walking, and several had eyelids so swollen, their eyes were red.

Rescuers said they were overwhelmed by the stench of ammonia, feces, and raw chicken.

The HSUS shot video of the dogs and the terrible conditions inside the home. WATCH IT BELOW:

“It’s astonishing that such cruelty can occur and I’m so relieved that these animals are now safe and in the hands of people who will provide proper care for them. We anticipate caring for them for several months," Lindsay Hamrick, New Hampshire state director for The HSUS, said.

Chief Dean Rondeau of the Wolfeboro Police Department said that he's never seen anything like this in his life.

“I’ve never seen conditions this bad in more than 21 years of law enforcement. Words cannot describe the absolute abhorrent conditions these animals were living in. I would like to extend my heartfelt thanks to The Humane Society of the United States, Conway Area Humane Society and Pope Memorial SPCA, whose expert opinion and counsel was well-received, as well as the other local organizations who assisted at the scene," he said.

The dogs have been taken to an emergency shelter for treatment. They will be thoroughly examined by a team of veterinarians and receive any necessary immediate medical treatment at the emergency shelter, Humane Society officials said.