CLINTON TOWNSHIP, Mich. (FOX 2) - As the investigation continues into who scammed an 87-year-old man out of hundreds of dollars in Clinton Township, the victim is getting a pick-me-up from DTE Energy.

As police continue to investigate a scam in Clinton Township, DTE Energy is visiting the 87-year-old man who fell victim to the impostor.

"He said we're here because we're going to have an electrical shutdown in the area and we're checking to make sure everything's alright here and we're going to set you up to give you a $49 discount," Richmond said. "So I, like a dummy, I let the guy in."

The guy went to Frank's basement, stole his wallets from behind his bar and took off in a silver truck.

"Be on your toes. Don't let anybody in, especially if you're old like me," Richmond said.

DTE agrees with his statement and says don't let anybody in who comes to your door and never give anyone money - and always make sure you ask for a photo ID because these scams happen all too often.

"Ask for ID. Know that we don't send people out to collect and immediately shut you off if you can't pay. Call that into to us, call that into your police department," says Chris Lamphear, DTE corporate communications manager.

When the real DTE workers saw Frank's story last week, they contacted the Clinton Township detectives wanting to help. And on Friday, some of those workers joined detectives - socially distanced, of course - to make a special delivery. 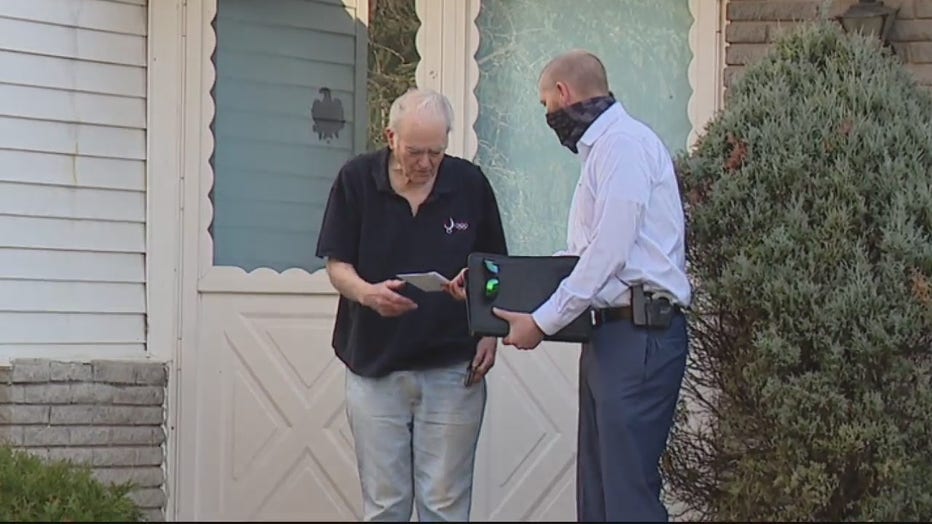 "They passed the hat around the office and they put a card together," Lamphear told Richmond. "This is a token from them to help you get through this hard time."

"I sure appreciate it, they shouldn't have done it," Richmond said in return.

"I know, they're good people though," Lamphear said.

Police are still investigating the crime and looking for a suspect.