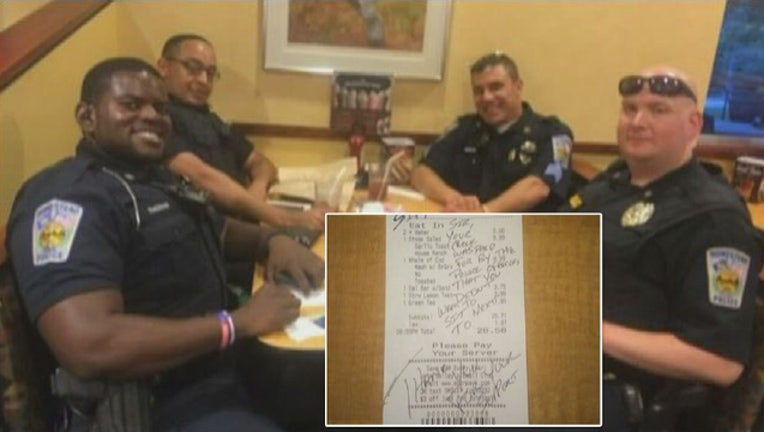 FOX NEWS - A group of police officers at a Pittsburgh area restaurant picked up the bill for a man and woman after the couple made it clear they didn't want to sit near them at a diner on Saturday. A waiter at the Eat N'Park diner in Homestead said the man looked over at the table of officers and "was like, 'Nah, I don't want to sit here.'" So, they got moved to an opposite side of the restaurant.

Officer Chuck Thomas said he tried to reassure the man, saying "It's okay sir. You won't have to worry about it, we won't hurt you." But the man looked back at the officer and said he wouldn't sit there and walked away. That's then the officers decided they would pay the couple's bill to show them their intentions were friendly.

"Essentially the whole goal of it was to let him know that we’re not here to hurt you, we’re not here for that," Thomas said. "We’re here for you. We work for the public. And we just want to better the relationship between the community and the police."

The bill was $28.50, and they tipped $10 on top. The officers wrote on the receipt, "Sir, your check was paid for by the police officers that you didn't want to sit next to. Thank you for your support. I left a $10.00 tip too." WTAE reporter Kelly Brennan said that the man shared a laugh with one of the officers and thanked him as he made his way out of the restaurant.