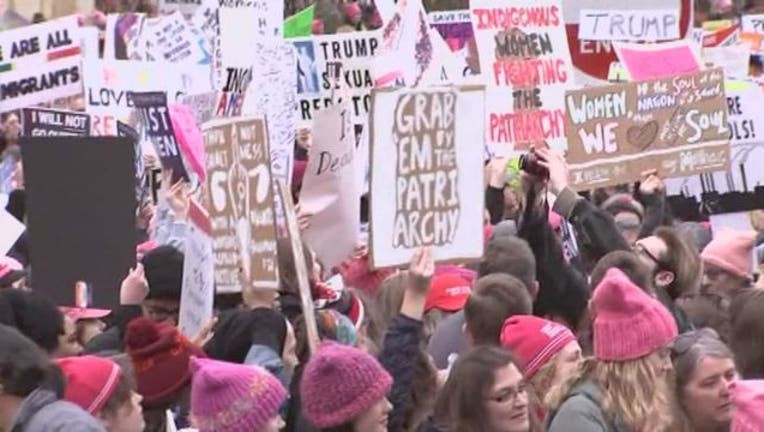 PHILADELPHIA (AP) - Organizers of January's Women's March have called for women to take the day off and encouraged them not to spend money to show their economic strength and impact on American society.

"A Day Without a Woman" on Wednesday is the first major action by organizers since the nationwide marches held the day after President Donald Trump's inauguration that drew millions of women into the streets in protest against misogyny, inequality and oppression. Though it is unclear how many women could participate, thousands across the country have signaled their support and interest online and to employers.

The event coincides with the U.N.-designated International Women's Day, and organizers say they want to "stand with women around the globe" who supported their efforts Jan. 21 with similar protests in cities around the world.

Spokeswoman Cassady Findlay said organizers were inspired by the recent "Day Without an Immigrant" protests held last month. She said the action is aimed at highlighting the effect of women on the country's socio-economic system and would demonstrate how the paid and unpaid work of women keeps households, communities and economies running.

"We provide all this value and keep the system going, and receive unequal benefits from it," Findlay said.

Findlay said it is important for white women to be in solidarity with minority women.

"Throughout history, the strikes that have the biggest impact are the ones when people who are already the target of oppression participate," she said. "It's when women of all backgrounds strike and stand together that we're really going to see the impact."

Trump took to Twitter on Wednesday and asked followers to join him in "honoring the critical role of women" in the U.S. and around the world. He tweeted that he has "tremendous respect for women and the many roles they serve that are vital to the fabric of our society and our economy."

Unlike the Women's March, Wednesday's protest focuses on the absence of women, who are being steered to local rallies and community groups and away from work or shopping in stores or online. Organizers also are asking women to wear red to signify love and sacrifice.

More than a million people, mostly women, turned out nationwide for the Women's March. In New York, organizers are planning a gathering in Central Park at noon. International Women's Day rallies also are planned in Philadelphia, Baltimore, Milwaukee, Washington and Berkeley, California.

School districts including Prince George's County in Maryland, the Alexandria City Public Schools in Virginia and Chapel Hill-Carrboro Schools in North Carolina, have canceled classes in anticipation of employee participation. In Utah, as many as 1,000 women are expected to gather at the Capitol to remind lawmakers they are watching their actions on women's issues.

In Providence, Rhode Island, the municipal court plans to close because the demonstration in the city would leave the court without enough staff to open. Lovely Monkey Tattoo, a woman-owned tattoo parlor in Whitmore Lake, Michigan, is offering female-centric tattoos with messages like, "Neverless, She Persisted" for $50 to $100, with proceeds going to the Ann Arbor chapter of Planned Parenthood.

Some businesses have said they will either close or give female employees the day off. The event website provides templates for "out of office" emails, and an employer letter. The site has had more than a half-million visitors, and more than 60,000 had clicked on the letter template by Tuesday afternoon.

Organizers noted that only a fourth of participants in the Women's March signed up in advance to participate.

The role of women in American society is significant. According to the U.S. Census, women make up more than 47 percent of the workforce and are dominant in such professions as registered nurses, dental assistants, cashiers, accountants and pharmacists. They make up at least a third of physicians and surgeons, as well as lawyers and judges. Women also represent 55 percent of all college students.

Still, American women continue to be paid less than men, earning 80 cents for every dollar a man makes. The median income for women was $40,742 in 2015, compared with $51,212 for men, according to census data.

A Day Without A Woman: https://www.womensmarch.com/womensday/