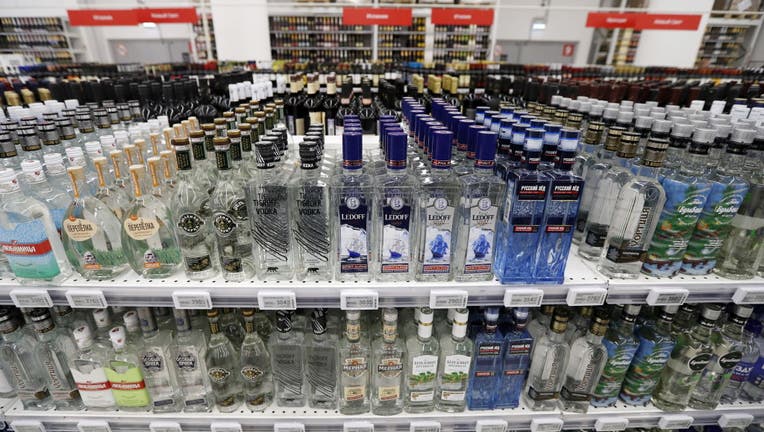 A file image taken May 22, 2019 shows vodka on sale at the Aviapark shopping mall in Moscow, Russia. (Photo by Artyom GeodakyanTASS via Getty Images)

Russian citizens have been warned to curb alcohol intake for two months after receiving the Sputnik V coronavirus vaccine, per news reports.

In general, the medical community has long recognized that excessive drinking can weaken the immune system.

“Clinicians have long observed an association between excessive alcohol consumption and adverse immune-related health effects such as susceptibility to pneumonia,” and more recently, respiratory distress related-syndromes, according to NIH-published research.

Margaret Keenan became the first person to receive a fully-tested and approved vaccine amid the coronavirus pandemic. (Credit: NHS England via Storyful)

Russia has dropped its average alcohol consumption rate per person from over 15 liters (about 4 gallons) around 2010 to 11.7 liters (about 3 gallons) in 2016, according to three-year averages from a 2018 World Health Organization report.

However, "heavy episodic drinking among drinkers is very high (≥ 60% of current drinkers) in the Russian Federation," per another WHO report, and heavy drinking most often results in liver cirrhosis, traffic-related injuries and, though less frequently, cancer.

Last week, President Vladimir Putin ordered the launch of a “large-scale” COVID-19 immunization campaign, prioritizing doctors, teachers and other essential workers. Russia has said 100,000 people have already been vaccinated, though the vaccine has been widely criticized because it was approved over the summer after being tested on only a few dozen people.

Last month, developers of the vaccine said interim analysis of trial data showed it was 91.4% effective. The conclusion was based on 39 infections among 18,794 study participants that received both doses of either the vaccine or a placebo, which is a much lower number of infections than Western drugmakers have looked at when assessing the effectiveness of their vaccines.