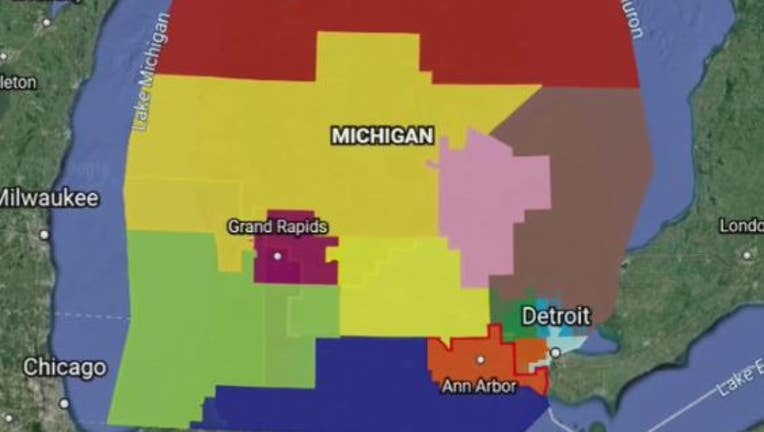 A draft of Michigan's new congressional maps that have been drawn by the state's redistricting commission.

LANSING, Mich. - Michigan's Independent Citizen's Redistricting Commission is facing criticism from the state attorney general after the new group held a closed session meeting that should have been available to the public.

Labeling the move 'repugnant," Attorney General Dana Nessel admonished the redistricting group for discussing its plans to rewrite district boundaries out of the public eye. In an opinion released Monday, the AG argued it was "imperative" that decisions made by the commission be done in a public manner.

"The citizens of this state are owed a transparent process and the Commission must do its best to meet that expectation," wrote Nessel. The meeting in question occurred on Oct. 27 and included the discussion of two memos that have yet to be released to the public.

The legal team representing the commission has argued the memos discussed during the hour-and-a-half-long meeting were exempt from disclosure.

Yet the ballot initiative that was approved by voters in 2018 included language that required the map-drawing process to be done in open meetings.

In Nessel's opinion, she admitted that while there may be times when the commission could meet in closed sessions and it was out of the scope of her opinion to determine what should be included and what doesn't need to be. But, according to the 14-page opinion, the memos that were discussed referred to "business" that would help the members in their "developing, drafting, and adopting the redistricting plans."

"If this presumption is correct, then the Commission was conducting ‘business’ that should have been done in an open meeting," read the opinion.

The memos discussed during the closed session were titled "Voting Rights Act" and "The History of Discrimination in the State of Michigan and its Influence on Voting."