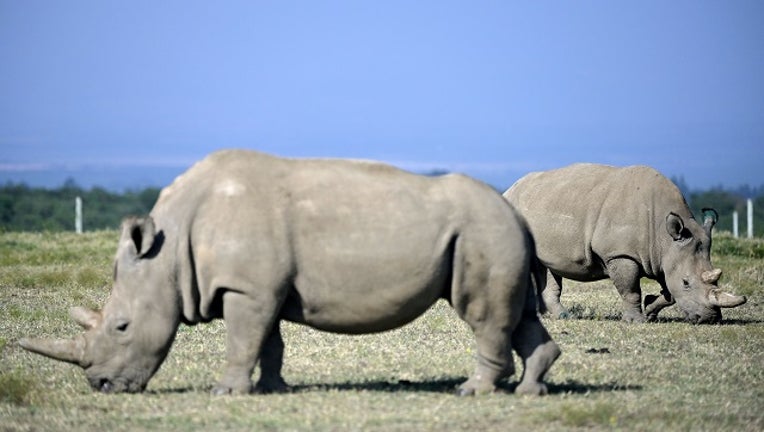 JOHANNESBURG (AP) - Researchers say they have successfully created another embryo of the nearly extinct northern white rhino in a global effort to keep the species alive. Just two animals remain, and both are female.

The viable embryo is just the third to be created in a lab with eggs taken from the females and inseminated with frozen sperm from dead males, according to Wednesday's statement. The embryos are stored in liquid nitrogen to be transferred into a surrogate mother -- a southern white rhino -- in the coming months.

"It's amazing to see that we will be able to reverse the tragic loss of this subspecies through science," said Kenya's wildlife minister, Najib Balala, in the statement by the Kenya Wildlife Service and conservationists from Kenya, the Czech Republic, Germany and Italy.

The ultimate goal is to create a herd of at least five animals that could be returned to their natural habitat in Africa. That could take decades.

The two remaining female northern white rhinos, Najin and Fatu, are hosted by Kenya. The three viable embryos have been created with eggs from Fatu.

"Now the team will make every effort to achieve the same result for the 30-year-old Najin before it is too late for her," said Thomas Hildebrandt with the Leibniz Institute for Zoo & Wildlife Research in Germany.

The procedure has proven to be safe and can be performed regularly before the animals become too old, the new statement said.

The next step is to select female southern white rhinos among those at Kenya's Ol Pejeta Conservancy to serve as a surrogate mother, Kenya's wildlife minister said.

Decades of poaching have taken a heavy toll on rhino species. The animals are killed for their horns, which have long been used as carving material and prized in traditional Chinese medicine for their supposed healing properties.

The last male northern white rhino was a 45-year-old named Sudan, who gained fame in 2017 when he was listed as "The Most Eligible Bachelor in the World" on the Tinder dating app as part of a fundraising effort. Sudan, named for the country where he was born in the wild, was euthanized in 2018 because of age-related ills.