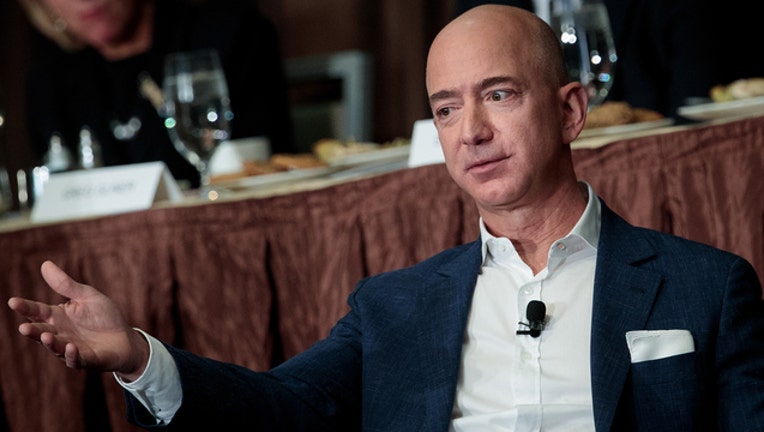 LOS ANGELES (AP) -- - Amazon CEO Jeff Bezos said Thursday he was the target of "extortion and blackmail" by the publisher of the National Enquirer, which he said threatened to publish revealing personal photos of him unless he stopped investigating how other private photos and messages were obtained by the tabloid.

Bezos, who is also owner of The Washington Post, detailed his interactions with American Media Inc. in an extraordinary blog post Thursday on the Medium.com website.

After the tabloid published a story about his extramarital affair last month, Bezos ordered a team of private investigators to get to the bottom of how the Enquirer obtained lurid texts between the executive and former TV anchor Lauren Sanchez. Since then, there's been a public relations battle.

Earlier this week, the tabloid's editor, Dylan Howard, emailed an attorney for Bezos' longtime security consultant in order to describe photos the Enquirer "obtained during our newsgathering." The photos include a "below the belt selfie" of Bezos, photos of him in tight boxer-briefs and wearing only a towel, and several revealing photos of Sanchez, according to the email Bezos released in his blog post.

According to emails Bezos posted, an attorney for American Media Inc., the Enquirer's parent company, offered a deal Wednesday: The tabloid wouldn't post the photos if Bezos and his investigators would release a public statement "affirming that they have no knowledge or basis" to suggest that the Enquirer's coverage was "politically motivated or influenced by political forces."

Last month, the Enquirer reported that Bezos sent "sleazy text messages and gushing love notes" to Sanchez, months before Bezos announced he was splitting up with his wife, MacKenzie. Reporters for the Enquirer followed Bezos and Sanchez "across five states and 40,000 miles" and "tailed them in private jets, swanky limos, helicopter rides, romantic hikes, five-star hotel hideaways, intimate dinner dates and 'quality time' in hidden love nests," the tabloid said in its story. The Jan. 9 story carries the bylines of Howard and two reporters.

In his blog post Thursday, Bezos said he decided to publish the emails sent to his team "rather than capitulate to extortion and blackmail," despite the "personal cost and embarrassment they threaten."

An attorney for American Media Inc. did not immediately respond to a call seeking comment Thursday.