The traffic jam at the Blue Water Bridge spilled over onto streets near the highway. Truck drivers tried to wait out the long lines by pulling into the parking lots of nearby businesses - but space is limited.

FOX 2 (WJBK) - It's night two of a major headache for truckers trying to head into Canada. The Ambassador Bridge is still partially shut down due to a protest and those rerouted to the Bluewater Bridge -- are facing gridlock.

As of Tuesday night the Ambassador Bridge going from the US into Canada is still closed. Meanwhile trucks are coming from Canada to Detroit.

The shutdown is linked to the protest by the Canadian Freedom Convoy —  truckers from Ottawa who are protesting Canada's vaccine mandate and Covid restrictions.

Thus far the protest appears to be working - the Province of Alberta says its vaccine mandate will be dropped at midnight.

Tonight, the massive backups are now gone and its quiet.  That's because semi-trucks are being re-routed more than an hour away to the Blue Water Bridge in Port Huron — leading to more long lines and delays.

"I’m waiting to get on the ramp and go across Canada over to New York to deliver to a factory over there," said truck driver Terry Mullin.

In his 40 years on the job, Mullin says he has never seen anything like this.

"Basically, Canada only has two entrances here to the United States - Detroit and Port Huron here, and it’s heavy heavy traffic," he said.

Traffic backed up for miles on I-94 as semis made their way to the Blue Water Bridge after being directed away from the Ambassador Bridge in Detroit.

"There’s so many trucks that are waiting to deliver their freight," he said. "And freight is so important to everybody, to get to the businesses to receive stuff that you’re going to go shop at, so it’s got to move."

The traffic jam at the Blue Water Bridge spilled over onto streets near the highway. Truck drivers tried to wait out the long lines by pulling into the parking lots of nearby businesses - but space is limited.

This all started Monday afternoon with the gridlock at the Ambassador Bridge. In the last 24 hours, Windsor police claim they have answered nearly 350 9-11 calls and made nine arrests.

Back at the Blue Water Bridge, many are frustrated with the wait times, that according to MDOT, totaled more than an hour and a half for truckers Tuesday night.

Mullin didn't have time to wait. He called us a few hours after FOX 2 spoke with him saying he decided to turn around and go to Ohio, then to New York where he will cross the border there.

In all, he said he will lose about four hours of travel time because of the mess. 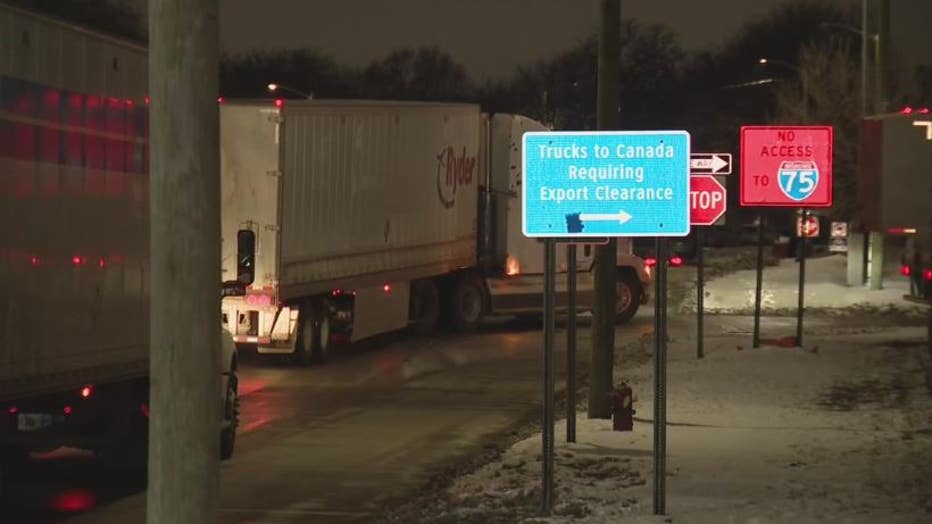