The four days of statements and testimony are being held amid the ongoing coronavirus pandemic and just three weeks before Election Day. In opening statements, Democratic senators painted Barrett as a threat to the Affordable Care Act and many Americans' health care — while GOP senators called her a thoughtful judge and defended her credentials and record.

Republicans appeared to have the votes to confirm the 48-year-old conservative judge to a lifetime seat on the Supreme Court, barring any major development.

Monday's session included opening statements from 22 senators on the committee, each given 10 minutes to speak. Barrett was then sworn in by the chairman and delivered her opening statement.

Barrett, a federal appeals court judge, told the Senate Judiciary Committee that she is “forever grateful” for Ginsburg’s trailblazing path as a woman.

“No one will ever take her place. I will be forever grateful for the path she marked and the life she led,” Barrett said.

But she is resolved to maintain the perspective of her own mentor, the late conservative Justice Antonin Scalia and “apply the law as written,” she said. 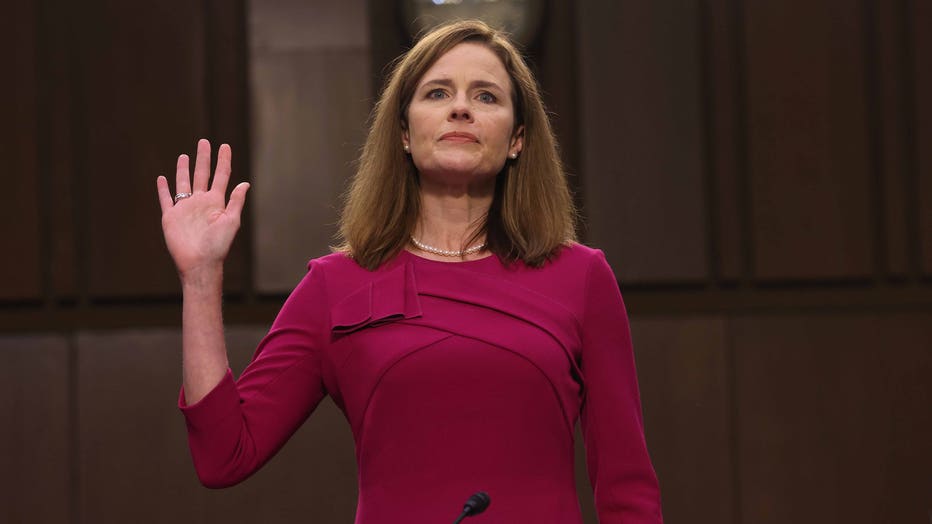 If confirmed, Barrett would move the balance of the court to a 6-3 conservative majority.

Some senators participated remotely and the hearing room itself was arranged with public health concerns in mind. Barrett was wearing a face mask, as were many of the roughly 100 people in the hearing room.

California Sen. Kamala Harris, the Democratic vice-presidential nominee and a committee member, participated remotely from her Senate office due to virus concerns. She called the session “reckless,” saying it should have been postponed.

“This hearing has brought together more than 50 people to sit inside of a closed-door room for hours while our nation is facing a deadly airborne virus,” Harris said. She added that Barrett replacing Ginsburg “would undo her legacy.”

Republicans, who control the Senate, have been pushing forward at a rapid pace before Nov. 3 to secure Trump's nominee and hear a high-profile challenge to the Affordable Care Act and any election-related challenges. Meanwhile, Democrats have been looking for ways to delay the fast-track confirmation by raising concerns about the safety of meeting during the pandemic.

Senate Judiciary Committee Chairman Lindsey Graham, R-S.C., who is presiding over the hearings, said in his opening remarks Monday that “the Senate is doing its duty constitutionally” by going ahead with the hearings. He said Barrett is in a “category of excellence” as a law professor and legal scholar.

Graham acknowledged the hearings are likely to be contentious, but said he hopes they do not replicate the divisive hearings for Justice Brett Kavanaugh. “She doesn’t deserve that,″ Graham said. ”The American people I don’t believe deserve a repeat of those episodes.”

Sen. Dianne Feinstein, D-Calif., described the late Ginsburg as someone who broke down barriers for women in America during her career, noting that Ginsburg's confirmation hearing was the first she participated in after being elected to the Senate. Feinstein, the top Democrat on the panel, said the “stakes are extraordinarily high for the American people” regarding health care coverage.

Feinstein added that Trump has promised to appoint justices who will vote to undo the Obama-era Affordable Care Act. The Trump administration is challenging the law in a case that will be heard by the Supreme Court on Nov. 10.

Barrett said she was “deeply honored” by the nomination. Becoming a Supreme Court justice was “not a position I had sought out, and I thought carefully before accepting.”

“I chose to accept the nomination because I believe deeply in the rule of law and the place of the Supreme Court in our nation,” Barrett said. “I believe Americans of all backgrounds deserve an independent Supreme Court that interprets our constitution and laws as they are written. And I believe I can serve my country by playing that role.”

In 2017, Trump nominated Barrett to fill the vacant seat on the 7th Circuit Court of Appeals, a jurisdiction that covers Indiana, Illinois, and Wisconsin. Barrett was previously considered for the Supreme Court, among those on a list to replace retiring Justice Anthony Kennedy in 2018. Trump ultimately chose to nominate Kavanaugh.

Barrett introduced the committee to her seven children and said she uses them as a test when deciding cases, asking herself how she would view the decision if one of her children were the party she was ruling against.

“Even though I would not like the result, would I understand that the decision was fairly reasoned and grounded in law?” she told the panel.

Barrett, a devout Catholic, said she believes in the “power of prayer.” Barrett's religious views and past leadership role in a Catholic faith community pose a challenge for Democrats as they try to probe her judicial approach to abortion, gay marriage and other social issues without veering into inappropriate questions of her faith.

Barrett also told the committee that courts should stay away from making policy judgments.

“Courts have a vital responsibility to enforce the rule of law, which is critical to a free society. But courts are not designed to solve every problem or right every wrong in our public life. The policy decisions and value judgments of government must be made by the political branches elected by and accountable to the people,” Barrett said. “The public should not expect courts to do so, and courts should not try.”

Democratic presidential candidate Joe Biden said Democrats should make health care the focus of the hearings, and not Barrett’s Catholic faith. Ahead of a campaign trip to Ohio on Monday, Biden said he doesn’t think “there’s any question about her faith.” Biden is also a practicing Catholic.

Sen. Patrick Leahy, D-Vt., told Barrett in his opening statement that his constituents are “scared that the clock would be turned back to a time when women had no right to control their own bodies and when it was acceptable to discriminate against women in the workplace.”

RELATED: Where does Amy Coney Barrett stand on key issues

Leahy, who spoke virtually, also said it was “plainly unsafe” to hold the hearings in person.

Two GOP senators, Sens. Mike Lee of Utah and Thom Tillis of North Carolina, announced Oct. 2 that they had tested positive for COVID-19. Both attended the Sept. 26 Rose Garden ceremony to introduce Barrett as Trump’s nominee.

Lee was in the hearing room Monday and released a doctor’s letter saying he no longer needs to be in isolation for COVID-19, allowing him to join the confirmation hearings. Tillis was participating remotely, though he too is symptom-free, his spokesman said.

Sen. Mike Lee of Utah speaks during the opening of the confirmation hearing for Supreme Court nominee Amy Coney Barrett. Lee previously tested positive for COVID-19 but was in the hearing room Monday after his spokesman said he was symptom-free.

The committee released a letter from the Architect of the Capitol on Sunday that says the hearing room has been set up in consultation with the Office of Attending Physician with appropriate distance between seats and air ventilation systems that meet or exceed industry standards.