FOX 2 - Day 10 of the UAW-GM strike has ended and talks are expected to resume Thursday.

But the day brought big news as a letter from UAW leaders said, "All unsettled proposals are now at the Main Table" and have been given to GM ... "and we are awaiting their response."

"Considering they sent out this notice and everything else, they could possibly have something in the next 12 to 24 hours," said auto analyst Paul Eisenstein.

It is close to the finish line says Eisenstein, but not there yet.

"These sort of things can stumble and fall just like any racer at any moment," Eisenstein said. "You can get close and it just doesn't come together."

The UAW informed members Wednesday that all unsettled proposals are now at the main bargaining table at the Ren Cen; it's where some of the toughest negotiating happens.

"We know that contracts can break down over a penny an hour," Eisenstein said.

In the meantime, politicians keep picketing and Democrats like Bernie Sanders are showing solidarity with the UAW.

"I am here to thank you for standing up to corporate greed," Sanders said Wednesday, when he visited the picketers in Hamtramck.

The news of the main table talks Wednesday was the first real update after days on the picket line.

"It sounds like good news," said Frank Parker, a GM UAW member. "I hope they are making progress; we are going to stay out here as long as it takes." 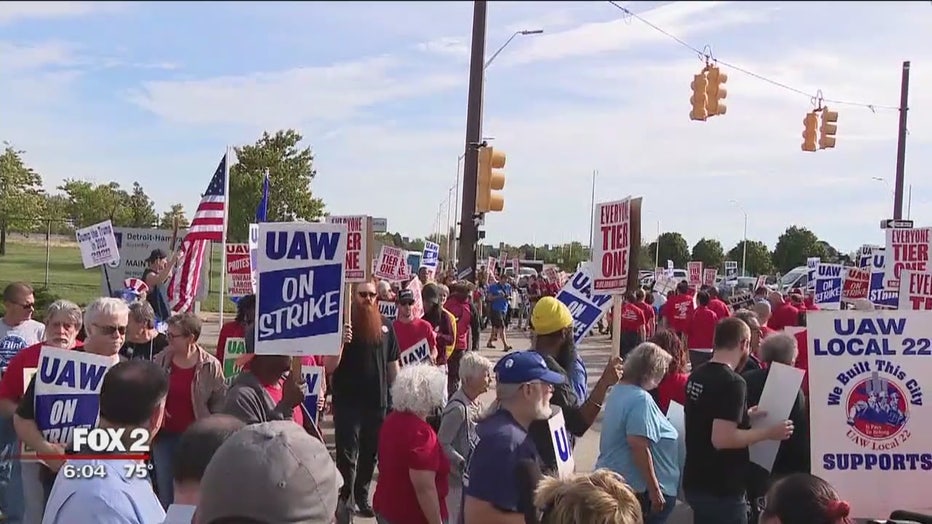 Porter was out here in Warren for 10 days now. He's been with GM for 24 years.

"We don't know exactly what the lingering grievances are. We are not at the table but we trust in our membership and the people there negotiating," he said.

"I've been out here going on the second week and I haven't received my $250 yet and it probably won't be until Sunday or Monday of next week," Porter told us.

Workers say it is worst for temporary employees and those with less seniority most.

Once a tentative agreement is made at the main table, it goes to the UAW council which are members that represent the workers. Then it has to go to rank and file for final approval.