SARASOTA, Fla. - Hours before America changed forever, Andy Card remembers the start of that Tuesday September morning like everyone: Blue skies and the sun shining.

"I remember it was a perfect day," Card said. "When I stepped outside, when the sun came up, it was just like a perfect day."

But the chief of staff to President George W. Bush was not in New York or Washington on September 11, 2001. He was in Sarasota with a class of students at Emma E. Booker Elementary School.

Card was breaking down the morning to the president.

"You’re going to read a book with second graders, and it was his favorite topic, leaving no child left behind in education, and it’ll be an easy day."

RELATED: Most Americans over 30 remember where they were on 9/11, survey says 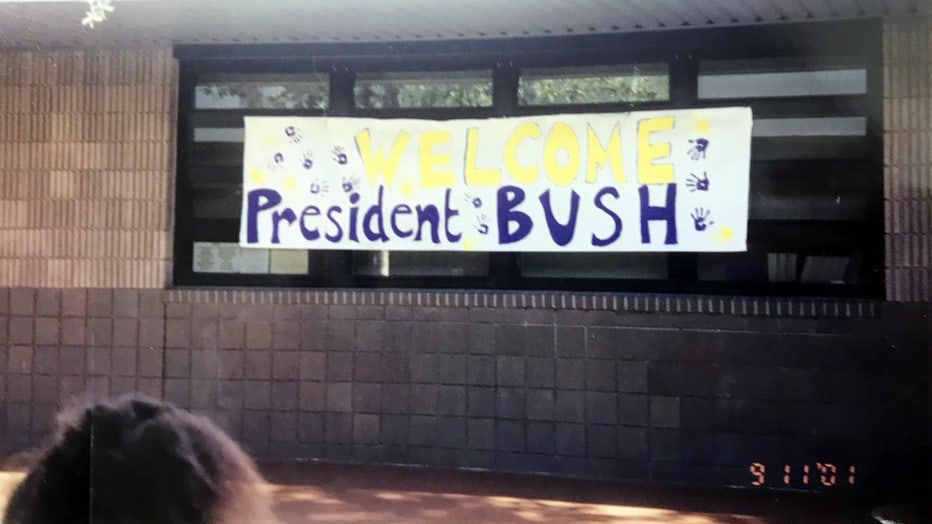 At FOX 13, now-retired reporter Brian Goff was on his way to cover it.

"We’d covered presidential visits before; it’s all tightly scripted," Goff said. "It was neat though because it was a presidential visit, and Mr. Bush was the president, so it was cool to be there. And there we were. And little did we know what was to come."

At 8:46 a.m., a commercial airliner hit the north tower of the World Trade Center. Card says the belief, at first, was that it was a smaller private plane.

"I’m standing at the door to the classroom with the principal, and the president and I were standing there when a Navy captain named Deb Loewer came up to the president and said ‘Sir, it appears a small twin-engine prop plane crashed into one of the towers at the World Trade Center.’

"The principal, president all had the same reaction – ‘Oh, what a horrible accident, the pilot must have had a heart attack or something,’" Card continued.

Moments later, after the president was already seated with the children, Card would learn it was a commercial airliner.

"Captain Loewer came up to me and said, ‘Oh my God, another plane hit the other tower at the World Trade Center,’" he recalled.

And then, the unforgettable moment that became an iconic image: Card whispering the news in the president’s ear. 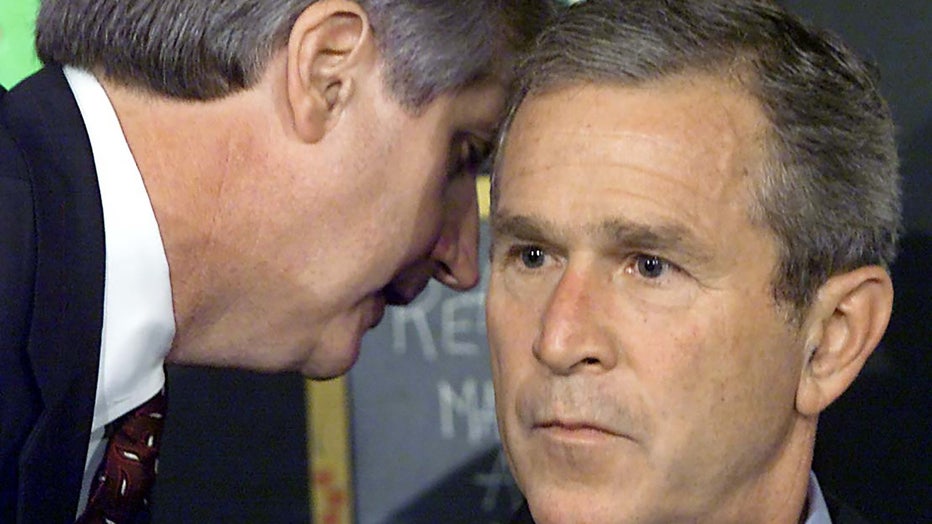 President George W. Bush being informed by Andrew Card of the attacks on the World Trade Center in New York during a school reading event in Sarasota, Florida. (PAUL J. RICHARDS/AFP via Getty Images)

"As the students were reaching under their desks, that’s when I walked up to the president, leaned over and whispered, ‘A second plane hit the second tower, America is under attack,’" he said. "I then stood back from him so he couldn’t ask me a question. I watched him digest what I said."

Goff was in a room right off that classroom, watching the White House press corps pool feed on a monitor.

"The president’s demeanor changed right away, you could see that on TV," he offered. "Everyone in the room where I was said, ‘Oh, look at this, something’s happening.’ Because remember, I said everything was scripted. That wasn’t in the script."

Behind the scenes at Booker Elementary School on Sept. 11th

The president, the media, and students all learned about the terror attacks as cameras were rolling.

RELATED: Bush was in Sarasota classroom when grim news came

Within minutes, Goff says, the chatter was to get to a TV – and that’s when they saw the towers burning.

"We were astounded, and off to work we go," he continued. "Because this was history in the making, you know?"

Bush would soon leave the classroom, then give a speech before quickly departing on Air Force One.

Where are they now: Students in classroom with President Bush on Sept. 11th

Twenty years later, the Florida elementary school students who were eyewitnesses to history are now grownups, with lives shaped by that day.

Card says to this day, it was that moment where Bush became president.

"I honestly believe that was the moment he understood what the job of the president of the United States is," added Card. "It’s not about your personal agenda. It’s about keeping your oath of office. Preserve, protect and defend."

RELATED: ‘I can hear you! The rest of the world hears you’: George W. Bush’s bullhorn speech