DETROIT - Are you team Dragonflies, Frogs and Toads, or Red-Winged Blackbirds?

Answer the question and your first task is complete. But for the committed volunteers of the Friends of the Rouge, there's still a long way to go - and many badges to collect.

Plant a tree for some shade and stormwater relief. Take a night walk and record the number of amphibian calls you hear. If you're feeling particularly motivated, seek out and pull some dreaded garlic mustard.

These jobs, among dozens of other challenges makeup the normal Rouge Rescue event that's held every year. But like almost everything else scheduled for 2020, nothing is normal.

"We've had to drastically rethink what we wanted to do so as to not lose momentum," said Cyndi Ross, restoration manager for the nonprofit. "This is our big event. Friends of the Rouge was founded on this. It's an event that really does connect people to the Rouge River." 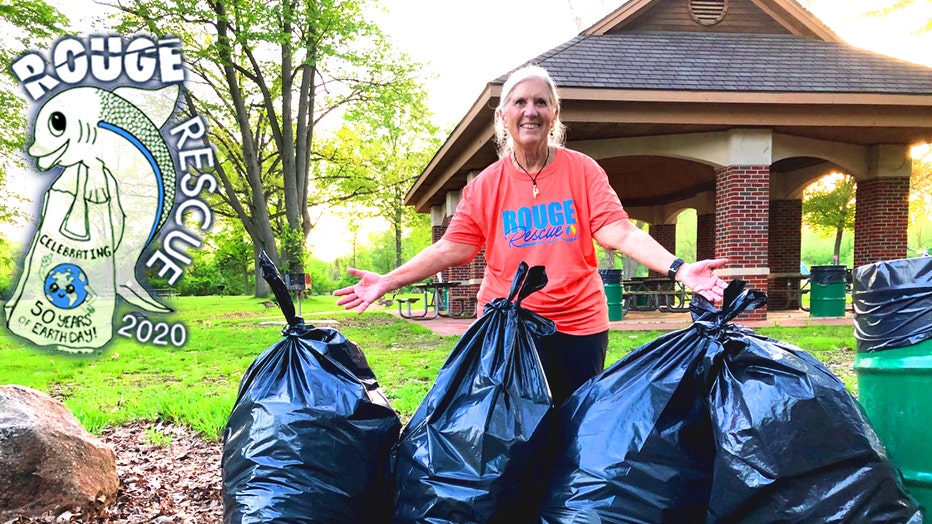 Under traditional circumstances, thousands of residents that live in the watershed partake in the annual Rouge Rescue event. For the last 34 years, people have spent mid-May cleaning up trash around their homes, rooting out well-known invasive plants, planted trees, and banded together with other community members in a decades-long effort of cleaning what once was one of the country's dirtiest rivers.

The Rouge River, one of Southeast Michigan's main river networks and most developed watersheds in the state has suffered from decades of historic pollution. Since water quality standards were put in place in the 1970s, the river's cleanup has been dramatic - partly due to the efforts of volunteers like Friends of the Rouge.

RELATED: In 1969 the Rouge River burned. 50 years and more than a billion dollars later, life has returned to the water

While COVID-19's outbreak in Michigan may disrupt restoration efforts, it's by no means canceled them. Even as residents have sheltered in place and avoided exposure to the virus under orders from the governor, the river hasn't stopped flowing. Uninterested in losing decades of momentum, Rouge Rescue is going online this year.

"We created a virtual platform to engage in activities that promote cleaning up trash or managing stormwater," Ross said. "There's tree planting and also some fun activities for kids to do like coloring native plants and finding different flowers that are blooming."

Using their online tool, volunteers can sign up and start collecting points for all of their completed tasks. Some tasks are as simple as taking a walk, while others require more involvement like stabilizing shorelines along the river. For beginners looking to unlock their first badge, Friends of the Rouge recommends you start out easy with their "Get into the Game Badge."

Even with the virtual world now tacked onto the Rouge Rescue event, most completed tasks still ask you to venture outside. Whereas groups of 20 might have congregated near Rouge Rescue Cleanup sites, 2020's event ask you only stray as far from your home as social distancing and your comfort zone allow. That might mean installing a rain barrel in your yard to prevent runoff into Metro Detroit's streets or complete bird counts from your porch.

For Friends of the Rouge, cleanup efforts will appear more decentralized than ever before. But much like the shared endeavor of restoring a watershed which is home to more than 1.3 million residents, restoring the river will be the culmination of thousands of individual acts working toward one common goal.

Rouge Rescue's Day of Action kicks off May 16. If you want more information on the annual event or how to sign up, click here for more.