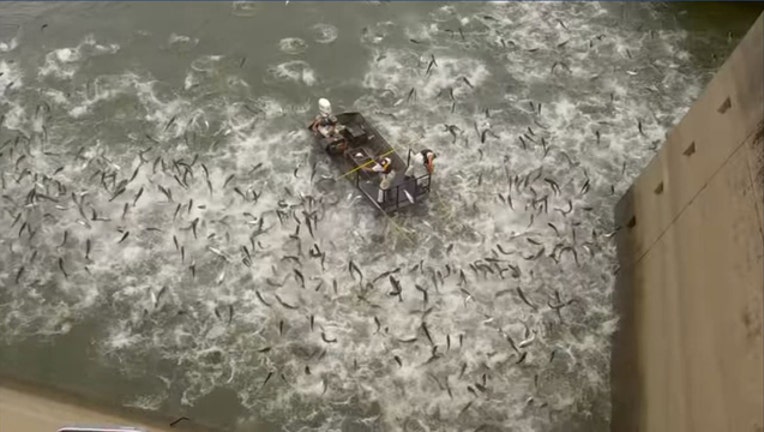 Then a countdown commences. When the voice says "one," hundreds of silver-colored fish breach the water's surface and jump into the air, the sounds of splashes fill the air like running rapids. The fishermen frantically wave their nets trying to catch as many as they can.

The next 30 seconds feature an all-out frenzy of fish jumping out of the water, before lying still and surrounding the boat as the fisherman scoop as many as they can. The fish aren't dead, merely stunned - but for the millions of people and fish that inhabit the Great Lakes hundreds of miles away, it should set off alarms.

That's because the video, put up by the Kentucky Department of Fish and Wildlife Resources on Wednesday show just how bad the state's Asian carp problem has gotten, and what lies in wait for bodies of water north if the appropriate measures aren't put in place.

Kentucky's fish and wildlife department is deploying a tactic used by researchers for counting fish populations in rivers and lakes, known as 'electrofishing'. While it won't kill the fish, any trapped in the video will be disposed of.

All four subspecies of Asian carp - Bighead, silver, black and grass - present the perfect cocktail of catastrophe for environmentalists. Bighead and Silver carp feed on plankton, a key foundation in the food web. Black carp eat mollusks and snails, of which the Great Lakes has an abundance. Grass carp naturally eat the vegetation that many native species use as shelter.

"If you're going to understand the (Asian carp) problem, you have to understand what's been going on in Lake Michigan for the last 40-50 years," said Peter Alsip, of Cooperative Institute for Great Lakes Research. "We've seen declines in the amount of productivity in the lake over that time period."

The amount of plankton, a key base in the Great Lakes food web has declined due to a dearth in phosphorus in the water. If the invasive plankton eaters make it to the Great Lakes, Alsip said it could wreak havoc on fisheries in the region.

"Already, there's not a lot of food left in the lake," he said. "If they can come in and survive on this food, they will make it much tougher for fish that already rely on a limited supply of plankton."

This threat to biodiversity and fish populations isn't just theoretical either. Take the video put up by the Kentucky fish and wildlife department, which focuses on Silver carp, who have a tendency to jump when shocked.

The department's director told CNN the fish present a potential threat to the recreational tourism industry in the state. If the fish aren't consuming food and growing at an exponential rate, they are jumping out of the water and colliding with boaters - really.

"(There's) studies showing 60 percent of the fish biomass in the Illinois river are Bighead carp," Alsip said. "In smaller sections, 80-90 percent can be big head and silver carp."

To stave off more invasion, officials have proposed solutions to keep the carp out of the Great Lakes, namely an electric fence and bubble screens in Chicago to deter them from entering Lake Michigan. One of those includes a $778 million plan at the Brandon Road Lock.