In FOX 2's sit down with the general, he talked about a 90-day program to get possible recruits where they need to be, without reducing standards.

DETROIT (FOX 2) - The nation's labor shortages has hit the military - and the current chief of staff of the Army was in Metro Detroit Wednesday night to talk solutions.

It provided a rare opportunity for both General James McConville and area leaders in business and education to have an open conversation about the challenges of military recruiting at Warren's TACOM facility on Wednesday.

"Right now 23 percent of Americans are qualified to serve in the Army so we want to give them that opportunity to serve," McConville said. "And up in here in the great state of Michigan, there’s not a lot of active duty military. So part of this is coming up and exposing the community to the options that are available in the Army."

The meeting between the general, his staff and civic leaders, was designed to address the issues of childhood obesity and educational challenges, while finding ways the Army can better attract the best and brightest to join its ranks, amid a current soldier shortage.

In FOX 2's sit down with the general, he talked about a 90-day program to get possible recruits where they need to be, without reducing standards.

"When you think about it, you get 30 days vacation, you get a chance to serve an organization that has a purpose of defending the nation, a very-well respected institution in the country and there are infinite possibilities. We just want to give everyone an opportunity to know what it’s all about."

The conversations continued at a reception downtown at the Detroit Athletic Club as participants zeroed in on solutions.

"It was great to meet the general and to hear there is a concerted effort to build some awareness and improve the plight of recruitment overall, and really understand their thinking around community engagement," said Shaun Wilson, Cadence Marketing and Communications. "I really was pleased to hear that."

The General says it’s about preparing the next generation of soldiers in a world where technology helps give the winning edge.

And speaking of world events, FOX 2 asked General McConville about the war in Europe as Ukraine marks six months of fighting Russia’s aggression.

FOX 2: Do you see any point where there could actually be some form of on-the-ground military engagement?"

"I’m not aware of any plans to put US soldiers on the ground in Ukraine," said McConville. "Right now what we are doing is, providing the equipment that is being directed by the administration, providing the training (and) the support to do that. 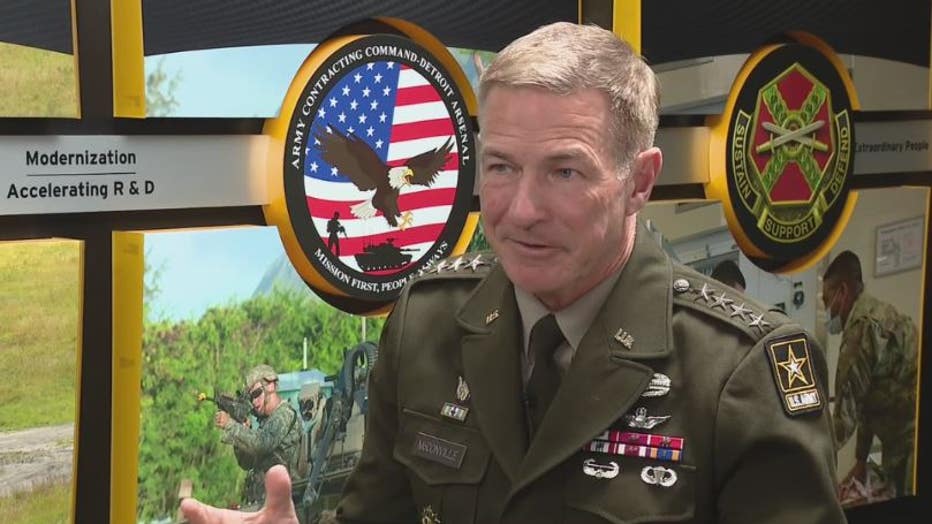 Chief of staff of the Army, General James McConville.