Astronauts aboard the International Space Station shared a video in celebration of the New Year and did a zero-gravity ball drop to ring in 2021.

Astronauts aboard the International Space Station had their own New Year’s Eve celebration, complete with a zero-gravity "ball drop" to ring in 2021.

"We wanted to take a moment to wish all of you a very happy New Year," the crew says in a video shared Dec. 31. "One of the most famous New Year’s Eve traditions is watching the ball drop in Times Square in New York City."

The group then "drops" a blow-up model of Earth, which floats to the ceiling.

"As many of us celebrate the new year from home this year, we brought this famous tradition to space to share with you," the crew added. "We hope this inspires you to celebrate in your own way."

The video was shared by NASA Thursday on its social media platforms. 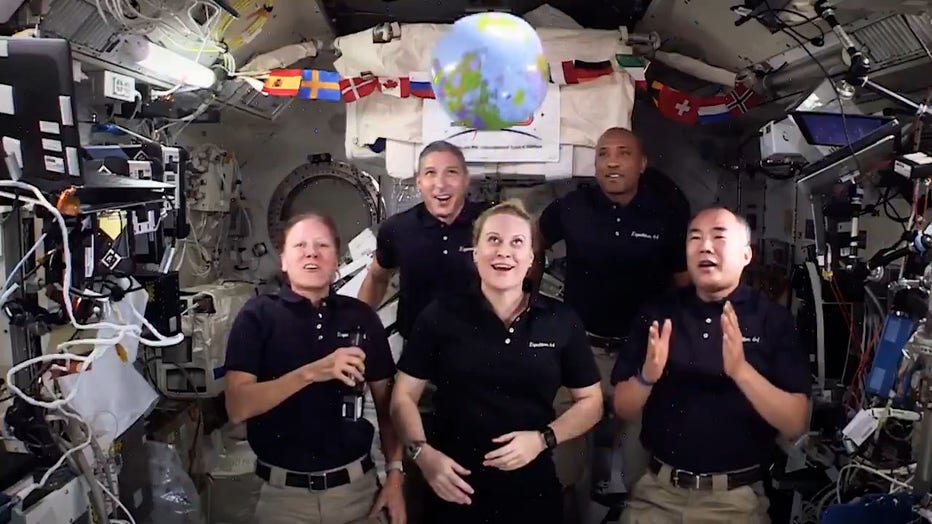 Some of the crew aboard the International Space Station celebrated 2021 by doing a zero-gravity ball drop in space. (Credit: NASA via Storyful)

There are currently seven astronauts on the ISS as part of Expedition 64, five of which appear in the festive video: Kate Rubins, Shannon Walker, Victor Glover, Michael Hopkins and Soichi Noguchi.

RELATED: New Year's Eve: A look at celebrations around the world amid the coronavirus pandemic

In the final weeks of 2020, the astronauts have conducted dozens of scientific investigations. Their research has included studies of how plants grow in micro-gravity, tissue regeneration, time perception, changes in heart tissue gene expression, and a possible method for removing space debris, NASA shared in a blog post.

The ISS has been continuously inhabited by humans for 20 years, achieving many scientific breakthroughs as it orbits about 250 miles above the planet.

And although the coronavirus pandemic complicated space operations in 2020, most high-priority missions remained on track, led by the U.S., China and the United Arab Emirates in a stampede to Mars in July.

In December, NASA named the 18 astronauts who will train for its Artemis moon-landing program — aiming for a moon landing by 2024. The first woman and next man on the moon will come from this elite group.