The standoff ended in a surrender with two arrests and no injuries on the city's west side in the area of Dayton at Westwood. Police credit the work of crisis intervention-trained officers who were able to negotiate the peaceful resolution.

DETROIT (FOX 2) - An attempted eviction turned into a barricaded gunman situation with shots exchanged between the suspect and Detroit police Wednesday.

The standoff ended in surrender with two arrests and no injuries on the city's west side in the area of Dayton at Westwood. Police credit the work of crisis intervention-trained officers who were able to negotiate a peaceful resolution.

"All you hear is ba ba ba ba, we got really scared," said resident Dulla Ali. "This is a beautiful neighborhood, and we don’t really see this type of stuff out here."

Police say they were called out by a bailiff, who according to sources, was attempting to evict the suspect in the area of Dayton near Evergreen. When police arrived, things escalated quickly.

"An exchange ultimately led to shots being fired from the individual inside the home," said DPD Deputy Chief Franklin Hayes."The bailiff along with the officers returned fire, and retreated and we went into our barricaded person protocol."

That includes bringing on scene CIT officers - police who are trained in crisis intervention.

"(We) tell them over loudspeakers, verbalizing -  we have a ton of officers that are CIT trained and to be able to share and communicate that whatever brought us to this scenario, these circumstances, it’s okay," Hayes said. "We want a peaceful resolution, come out. We can figure it out."

Within 30 minutes police were able to get two people inside the house out. Cell phone video shows a man being taken into custody.

A woman was also inside the house and arrested as well.

"Unfortunate circumstances but no one was harmed in today’s incident," Hayes said.

Police kept the perimeter and spent the next few hours making sure the threat was over, while looking for additional evidence.

"We did recover some firearms and wanted to make sure no one else inside was injured," he added.

Detroit police also thanked the community for providing police with the suspect's cell phone number and keeping the lines of communication open long enough to get them to come out peacefully. 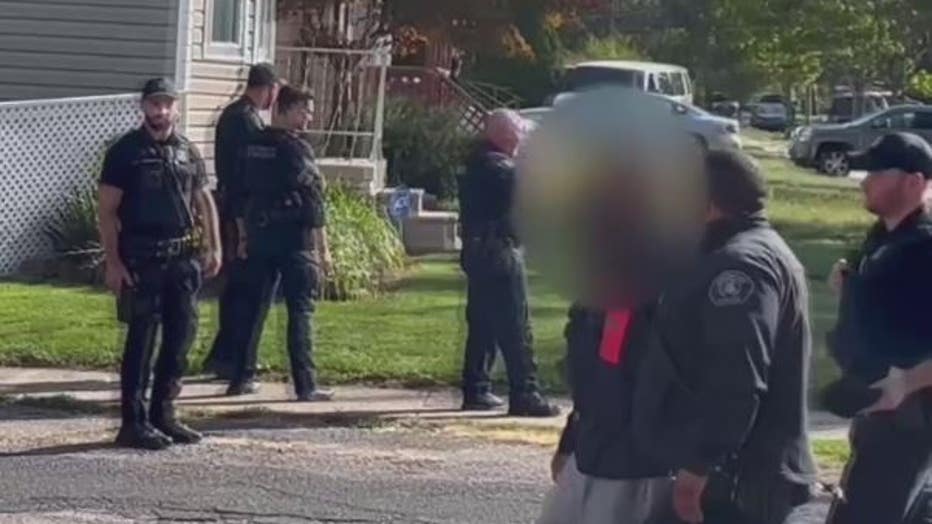 Eye-witness phone video of the barricaded gunman under arrest after a peaceful surrender.