CLINTON TWP., Mich. (FOX 2) - A woman with a gunshot wound made her way to the Macomb County Sheriff's Department Tuesday night from her Mount Clemens apartment.

"They realized that she had been shot and she informed them her boyfriend did it," said Chief Fred Posavetz, Clinton Twp. police.

She told them her boyfriend shot her in the shoulder.  The woman we are told is expected to recover.

Both deputies along with officers from Clinton Township, made their way to the Harbor Apartments where the suspect is said to be hiding.

As soon as they arrived at the scene, family members of the suspect pulled up.

"(The officers) got out of cars and were walking up to the apartment when two women came up and very frantic saying that they knew the suspect," Posavetz said.

Officers enlisted their help to call the suspect and get him to come out peacefully.

"They did that. and notified the officers who were on the scene, that he was going to surrender and come out of the apartment," the chief said.

But that is not what police say happened.

"Within seconds, six to eight shots rang out," Posavetz said.

At the time of the shooting, the officers were out of the car near the building. So when the shots rang out, they were not close to being hit. But some shots did hit the squad car, going through the driver side window.

The second bullet pierced the hood of the squad car. The chief says it is unclear where the other four shots landed.

"That can be a very dangerous situation for sure," the chief said.

As police took position, officers did not return fire.

"It is our belief that his gun did jam, and shortly thereafter he did come out and surrender," Posavetz said.

Police took the man into custody where he awaits charges for attempted homicide. 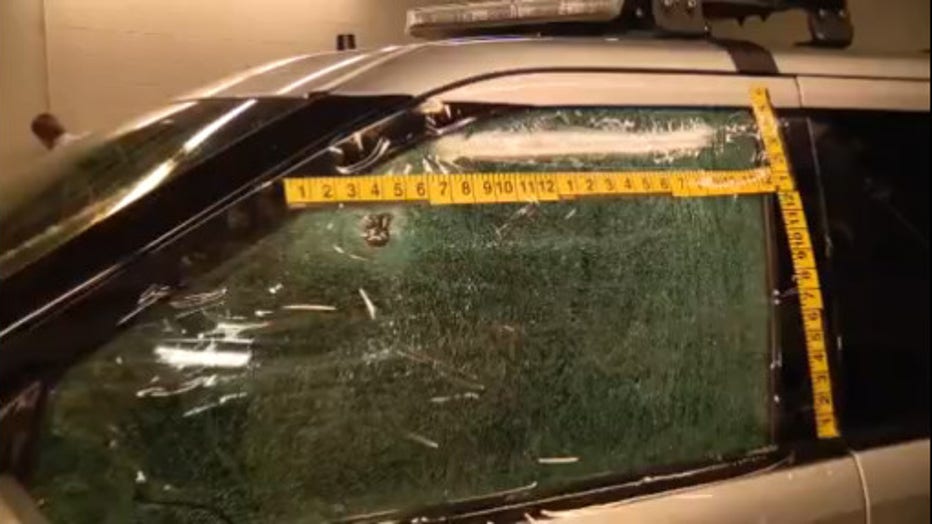