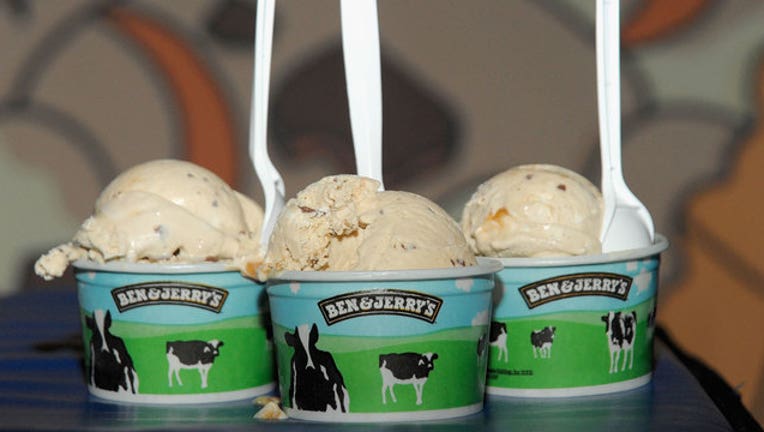 NEW YORK (AP) - The competition among low-calorie ice creams is heating up.

Ben & Jerry's, known for its ice cream filled with chunks of fudge, brownies or cookie dough, is the latest big brand to launch a slimmed-down version of its frozen treats. It's an effort to better compete with Halo Top, a low-calorie, low-sugar ice cream that is growing fast and sending shivers through older brands.

Halo Top's entire pints have fewer than 400 calories, and it emphasizes the full calorie count on the front of its package -- a move others are mimicking. Breyers, which like Ben & Jerry's is owned by Unilever, launched a line of light ice cream in July whose pints have 330 calories or less, with the totals printed on the front.

Ben & Jerry's entry, which will hit stores this month, is called Moo-phoria and cuts sugar and fat but still has cookies and dough. Dena Wimette, senior innovation manager at Ben & Jerry's, said customers asked for a lower-calorie version but wanted some crunch, which is hard to find in lighter ice creams.

The line will come in three flavors. A chocolate and vanilla ice cream mixed with cookies has 140 calories for half a cup, or 560 calories for the entire container. (A regular Ben & Jerry's pint can top 1,000 calories.) Unlike Halo Top, the Moo-phoria packages print the calorie count for a half-cup serving on the front. Wimette says the company doesn't want to encourage fans to eat the entire pint in one sitting.

But Halo Top's approach seems to be working for it. The company's share of the U.S. ice cream market more than doubled to 1.9 percent in 2017 from the year before, according to research company Euromonitor. Ben & Jerry's market share in that period was unchanged at 5.6 percent.

Halo Top did not respond to a request for comment.

Ben & Jerry's, which has chased other trends in the past -- including a no-longer for sale low-carb version -- still plans to offer frozen yogurts that have slightly more calories than its Moo-phoria line.