BERKLEY, Mich. (FOX 2) - A Berkley woman is recovering from major surgery became trapped in her burning home - but firefighters were able to rescue her.

"All I could think about, is I am not going to see him again," said Melinda Cronk.

A Berkley woman is recovering from major surgery became trapped in her burning home - but firefighters were able to rescue her.

She almost did not make to it tell her story. Earlier she was rescued from a second-story bedroom in her Berkley bungalow.

"They actually saved my life and they expected nothing in return, they just did it because that is what they do as part of our community," she said.

Cronk had just gotten home from a back procedure and with anesthesia still in her system, she was out of it. After lying down, she woke up to a noise and smoke downstairs.

"I saw smoke coming in and at that point, I knew I was in trouble," she said.

She called 911 but her back injury and a large four-post bed in front of the window prevented her from getting out.

"I started getting light-headed, really dizzy and it was getting dark in my room," Cronk said. "I remember looking at my hands and I could not see my hands."

Within minutes, firefighters had laddered up to her window and pulled her out of a small opening to safety. 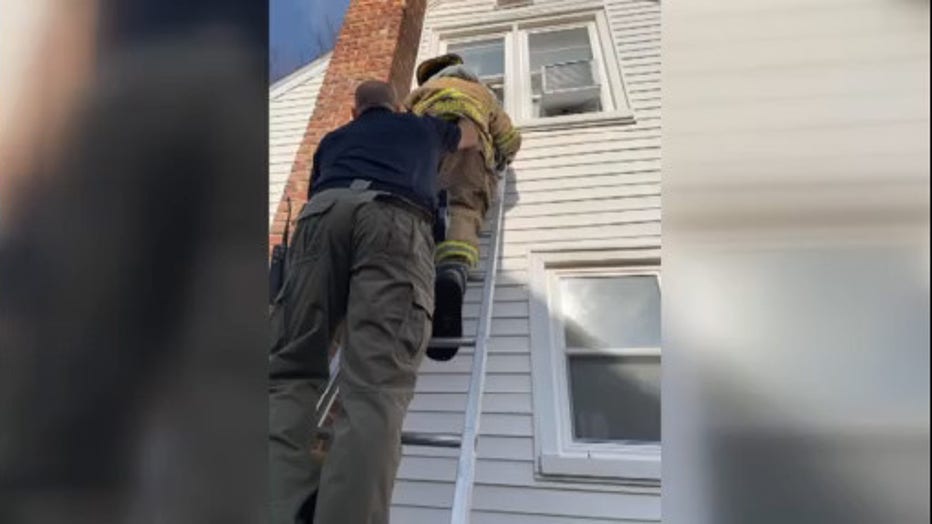 On a Ring Doorbell camera, a firefighter can be heard saying, "We are coming to get you, just stay by the window."

"He said, 'I need you now, we need to come now.' He said, 'Give me your hands.' I was able to climb over the headboard and squeeze in 8 inches," she said.

Melinda was telling him she was worried about her son's Navy photo inside the bedroom. He was being deployed later this week.

"I got to the hospital and they did all these tests and X-rays and I had a collapsed lung," she said. "All of a sudden (the firefighter) is coming into my room and he has this picture. (There is) soot and it smells but I will never get rid of it."

Cronk said she has a newfound respect for our first responders.

"I am eternally grateful to them that they gave my children back their mom, my husband gets his wife," she said.