FOX 2 - Sen. Bernie Sanders' message he brought to Dearborn Monday night could be summed up in three points.

He said Americans should not be afraid of Democratic Socialism; President Trump is afraid of the movement Bernie Sanders is leading; lastly Medicare for all is not a bad thing especially when you consider the implications of the coronavirus.

University of Michigan-Dearborn feels the Bern with town hall

Sanders was in town for a FOX News town hall, the last big push before Tuesday's primary - and Sanders addressed one of his biggest criticisms head on.

He was asked by U-M Ann Arbor student Margaret Beste about socialism.

"What assurances can you offer myself and others impacted by socialism that Democratic Socialism won't have the same results?"

"What happened and existed in the Soviet Union was not socialism," Sanders said. "It was authoritarian socialism."

"If I'm president I don't claim that I am the world's greatest scientific expert on climate change or the coronavirus," Sanders said. "Listen to the scientists. You don't say stupid things."

And with the concern over the coronavirus hitting fever pitch, Sanders used covid-19 to make a case for universal healthcare.

"You've got millions of people who may feel they have a symptom but you know what? They cannot afford to go to a doctor. And then they are going to go to work. We have a president of the United States who says it doesn't matter, go to work. We have a president who says some absurd things. What we need to do is right now, make it clear. All Americans, if they are feeling sick, go to a doctor, it will be paid for."

Sanders is trailing former Vice President Joe Biden in the polls, but he's pulled off upsets before. He beat Hilary Clinton in Michigan back in 2016, when polls had him down more than 21 points headed into the primary. 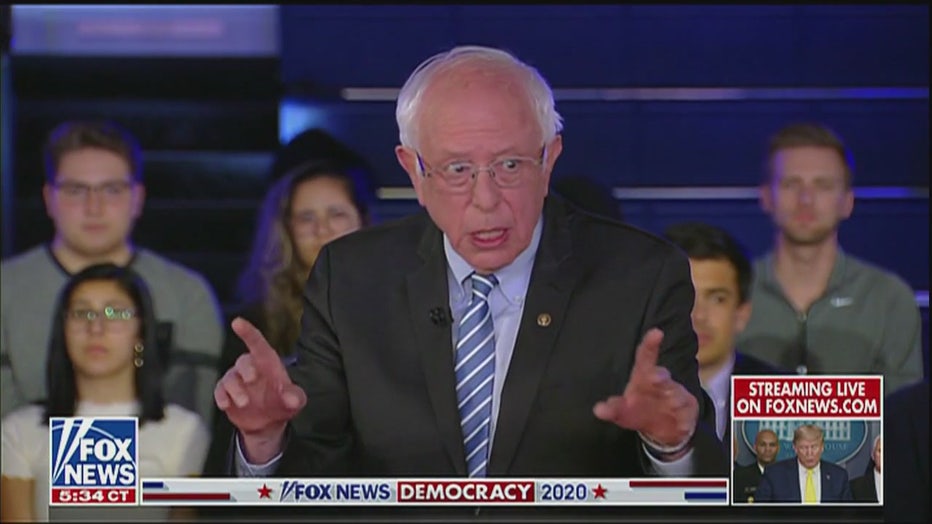 "We are creating a multi-racial, multi-generational, political movement of young people, working people, and people who believe in justice all across this country," Sanders said. "And in his heart of hearts, I think that is what makes Trump very nervous."

Jason Krzysiak is a part of that movement.

"I feel like he is speaking for us out there," Krzysiak said. "That is what was so invigorating about this crowd tonight. People were fired up for Bernie Sanders."

"I feel like if programs can go into poor communities, black communities, and enrich them or give them free college - or they don't have to worry about their medical bills anymore they can take that money and pump it back into their children for the next generation to prosper," said one student.

Voters in six states will cast their ballots Tuesday with 352 delegates are up for grabs. Michigan has the most with 125.