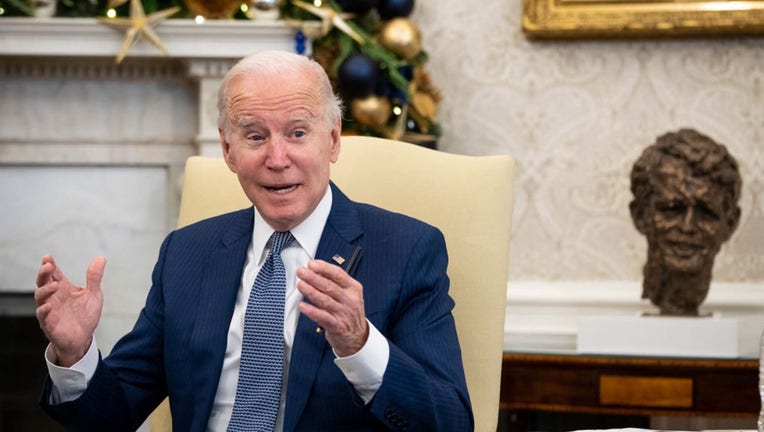 U.S. President Joe Biden speaks during a briefing about the recent tornadoes in the Midwest in the Oval Office of the White House December 13, 2021 in Washington, DC. More than 60 people were killed, and officials fear the number will grow after a se

In a video released Tuesday, President Joe Biden spoke directly to the families of those killed at Sandy Hook Elementary School nine years ago, saying the nation owed families of mass shootings "more than our prayers. We owe them action."

"No matter how long it’s been, every one of those families relives the news they got that day," Biden said in the video. "Twenty precious first-graders, six heroic educators, a lone gunman and an unconscionable act of violence. Everything changed that morning for you. And the nation was shocked."

A gunman killed 20 first-grade students and six educators inside Sandy Hook Elementary School in Newtown, Connecticut, on Dec. 14, 2012. The 20-year-old shooter, Adam Lanza, killed his mother at their Newtown home before the massacre, then killed himself as police arrived at the school.

Connecticut Gov. Ned Lamont called for flags to be lowered to half-staff across the state Tuesday in remembrance of the 26 people killed inside the school.

"We will never forget the twenty innocent children and six devoted educators whose lives were taken all too soon that terrible morning," said Lamont, a Democrat.

Biden said it was one of the "saddest days" he and former President Barack Obama had in office. Biden said he found hope in the strength of the families and felt they could pass meaningful reform, but it came up frustratingly short.

"And it’s still frustrating now, for you and me and so many others," he said, citing other mass school shootings in Parkland, Florida, and recently in Oxford, Michigan. "In countless communities across the country there’s these horrific shootings and make national headlines and embarrass us as a nation."

He said such shootings happen all the time, particularly in communities of color, and there is no mention in the news.

"As a nation, we owe all these families more than our prayers, we owe them action," he said.

Biden pointed to executive action he’s taken to stop the spread of so-called ghost guns and promote safe firearms storage. He also hopes communities use some of the money from the massive spending plan to help end gun violence.

So far, Justice Department strike forces focusing on gun trafficking corridors in several cities — part of the administration’s comprehensive approach to combat surging gun violence — have led to the recovery of about 2,000 crime guns, the official said.

The White House withdrew its nomination in September of gun-control advocate David Chipman to run the Bureau of Alcohol, Tobacco, Firearms and Explosives after he ran into bipartisan opposition in the Senate. His nomination had stalled for months and he was widely seen as one of the administration’s most contentious nominees.

The official said the administration is also working to identify another "highly qualified nominee" to run the Bureau of Alcohol, Tobacco, Firearms and Explosives.

But the official said the Biden administration was still doing all it can, even without a confirmed ATF director, to reduce gun violence. The official wasn’t authorized to speak publicly and spoke to reporters on condition of anonymity.

"Nearly a decade after Newtown, an average of over 100 Americans are being killed by gun violence every day, shattering families and terrorizing communities across the country," she said.

"In the memory of all those we have lost, and strengthened by our survivors’ hopeful spirit, let us renew our resolve to build a world free from gun violence, so that every child may grow up safe, secure and able to reach their fulfillment."