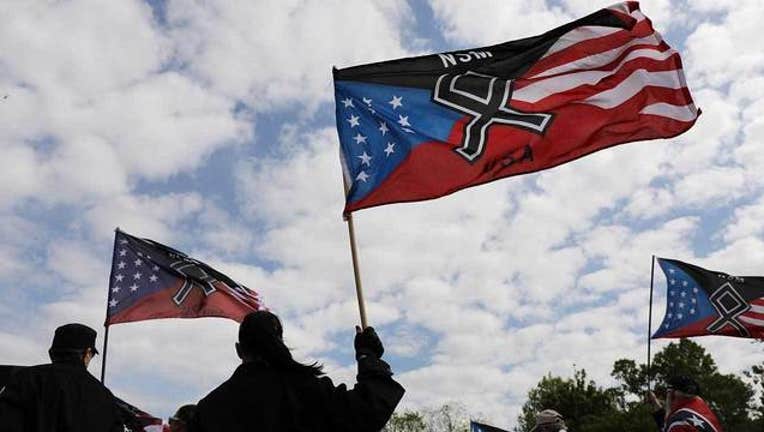 Members and supporters of the National Socialist Movement, one of the largest neo-Nazi groups in the US, hold a rally on April 21, 2018 in Newnan, Georgia. (Photo by Spencer Platt/Getty Images)

MORENO VALLEY, Calif. (AP) - A black activist said he has taken the helm of what has been billed as one of the nation's largest neo-Nazi groups to put it out of business.

In an interview with The Associated Press on Friday, Stern said he established a yearslong dialogue with Schoep and convinced the former leader to transfer the organization to him when Schoep said he planned to disband it.

"The National Socialist Movement put a poison pill into the truth of history. I think we can put the antidote to make sure that we correct some of those wrongs," Stern said.

Stern said he prefers to control the group and neuter it rather than see it disband and reconstitute in the shadows.

"If he dissolved the group, all anyone would have to do is take it and reincorporate it and carry on the same shenanigans as it never stopped," Stern said.

Schoep's resignation comes as he and the National Socialist Movement are among a slew of defendants in a civil lawsuit filed by survivors of a violent 2017 white nationalist rally in Charlottesville, Virginia. Plaintiffs in that case recently filed a motion accusing Schoep of doing everything he could to cause procedural delays and duck accountability for his conduct.

In a phone interview, Schoep said Stern essentially tricked him into transferring leadership. He said Stern suggested that the plaintiffs would no longer pursue the lawsuit against Schoep and the NSM if Schoep handed over the reins. Schoep said he was preparing to leave the party leadership anyway, and agreed to Stern's proposal as a way to try to reduce the party's legal liability.

"He has that piece of paper, but he is absolutely not recognized as the leader of the National Socialist Movement," Schoep, a Detroit resident, said of Stern.

Stern, though, says he can speak for the NSM, and filed his own motion in that case Thursday, saying the group now admits its liability in the lawsuit.

"Justice must be served and the truth must be told," Stern wrote in the motion. "Consequences must be excepted (sic)."

It is unclear whether the judge will accept Stern's status to speak for the organization.

Stern's actions invited comparisons to the recent Spike Lee movie "BlacKkKlansman" in which a black police officer infiltrates a branch of the Ku Klux Klan.

The lawsuit against Schoep, the National Socialist Movement and other white nationalist groups describes NSM as one of the nation's largest neo-Nazi groups, but a former officer in the group recently told the AP that it had only about 40 active, dues-paying members last year.