The words "Black" and "Lives" were covered with white paint this weekend where a BLM mural at Riverside Park had been designed and added to the pavement leading to the park.

MONDAY NEWS HIT - A Black Lives Matter mural was defaced this weekend after vandals covered some of the letters in white paint.

The mural, which is located on the pavement leading to Riverside Park in Ypsilanti, was completed in early June after approval from the city council to paint it in the city last February.

However, sometime in the last two days, members of a white supremacist group splashed white paint over the words "Black" and "Lives" while leaving the word "Matter" untouched.

"This was a community project that the community worked tirelessly to complete," read an email from Trische Duckworth, a co-lead behind the project.

Murals expressing support for BLM have been painted in cities around the country, including in Michigan. However, some have also been the subject of vandalism while public support for the group has led to heightened tensions in neighborhoods during a politically tumultuous couple of years for the country.

Some of that behavior appears to have trickled into Ypsilanti.

"To whoever did this last night: you're a real piece of human garbage," read a post on a community forum for the city. 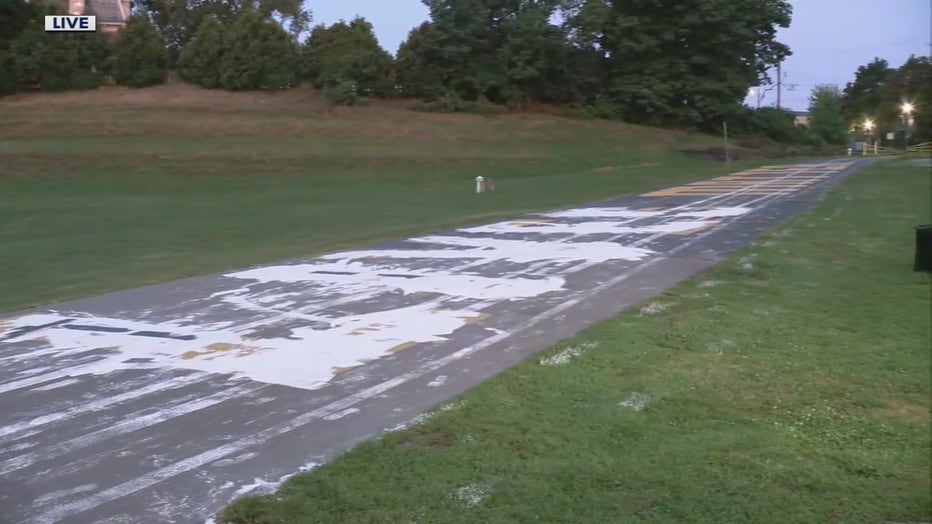 Officials suspect the group Patriot Front, a coalition of white supremacists, is behind the vandalism.

The city council plans to address the issue during its next meeting Tuesday while cleanup efforts are already underway.

After a pandemic-long closure of its recreation centers, the Parks and Recreation Department in Detroit will be reopening its community buildings to the public. The department is hosting a grand opening at the Adams Butzel center to celebrate the occasion.

The return of the rec centers invites new classes that residents can sign up for. However, the reopenings also mean Detroit will get to show off some of the shiny new amenities added to the recreation centers, which have undergone renovation work that includes floor and wall improvements, as well as landscaping and mural designs.

Butzel had the largest improvement, with a new ice rink. But other facilities like the Patton Recreation Center also got a tune-up. Those two, along with Kemeny, Farwell, and Lasky, will all open to reduced capacity this week. Typical safety precautions from masking up and social distancing will be in effect.

All other facilities remain under construction and won't be open for the Butzel's grand opening today. It's scheduled for 4-6 p.m.

The FBI said two explosive devices recently found outside cellphone stores in northern Michigan are believed to be linked to letters found last month in the Upper Peninsula. The bombs, which were discovered and defused Thursday, were found in suspicious packages left outside a Verizon store in Cheboygan and an AT&T store in Sault Ste. Marie. The FBI and Michigan State Police said in a statement that they believe the devices are related to a series of letters discovered in the Upper Peninsula last month.

Cheboygan authorities said emergency personal were dispatched around 9 a.m. Thursday after an employee reported a suspicious package near the door of the business. A bomb was found inside, which authorities removed and defused. A similar device was reported in Sault St. Marie.

The FBI said both devices were found in U.S. Postal Service boxes which were sealed with black duct tape and placed outside the stores. Each one had "CMT" written on it and contained threatening notes addressed to the cellphone companies. Multiple law enforcement agencies were investigating.

Michigan gas prices have fallen 2 cents compared to last week as drivers can now expect to pay somewhere around $3.16 per gallon on average. That's six cents less than last month but still $1.10 more than this time last year.

Michigan maxed out at about $49 for a full 15-gallon tank this summer, before seeing prices slip slightly. Currently, the average rate is closer to $47 for a full tank of gas. A 7-year-high was reached last week when gas rose two cents to $3.19, an early August peak. That rise was due to Hurricane Ida and slumping production. About 30% of production remains shuttered in the Gulf of Mexico.

According to the Energy Information Administration, the severe weather has led to a 9% drop in crude oil use. Meanwhile, the price of a barrel hit a level not seen since July - $72. "Despite decreased demand after Labor Day, the impact of the hurricanes and the latest crude price increases could help pump prices remain above $3 a gallon in the weeks ahead," said Adrienne Woodland, spokesperson, AAA-The Auto Club Group.

Metro Detroit's current average is $3.26 per gallon, slightly less than last week. It's still the most expensive in the state.

A lawyer for a state lawmaker said he will challenge a personal protection order that was obtained by another lawmaker. Democratic Rep. Mari Manoogian was granted an order against Rep. Steve Marino, a Macomb County Republican who has been removed from House committees.

The order could conflict with Marino’s ability to vote on the House floor if Manoogian is present. "I haven’t seen it," said Mike Rataj, a lawyer for Marino. "I anticipate we’ll be receiving it on Monday. I’ll review it and we’ll be moving to set it aside."

Marino, 32, said he and Manoogian, 29, had a relationship that ended more than a year ago. She said his removal from House committees stemmed from that "volatile" relationship. State police are investigating.

Monday's conditions will feel similar to this weekend with a little extra rain falling in the afternoon. But it's Tuesday and Wednesday's major shift in weather that people will want to be on the lookout for. Temperatures will take a tumble and lots of rain is expected across Metro Detroit.

Gabby Petito case: Cause of death not yet determined after body found in Wyoming match missing Florida woman

After days of pleading and searching for answers in Gabby Petito's disappearance, the FBI announced Sunday they believe they found the remains of the 22-year-old. Now, an autopsy scheduled for Tuesday will to determine a cause of death and positively identify the body.

Her fiancé, Brian Laundrie, a person of interest in the case, is also missing as of Monday morning. North Port police have been searching for him throughout the weekend. On Friday, investigators spoke to his family for the first time since Gabby was reported missing on Sept. 11. They told police they haven't heard from Brian since Tuesday.

Yesterday, the human remains were located in Grand Teton National Park in Wyoming. The FBI says those remains are "consistent with the description of Gabby Petito." The Teton County coroner has scheduled the autopsy for Tuesday.