DETROIT (FOX 2) - The fight against the COVID-19 virus has been a long one, to say the least. It's been 9 weeks since the first case and, while that may seem short, to the men and women on the frontlines it has surely been a struggle every day.

But on Tuesday morning, with the clouds parting, a thunderous roar from the west arrived as the Blue Angels flew over Southeast Michigan, passing by Henry Ford and Sinai Grace in Detroit, Beaumont in Troy, and then back through downtown Detroit.

The men and women who are on the street and in the hospitals helping everyone get through this COVID-19 crisis were honored Tuesday by a flyover by the Blue Angels.

They put on a show and for the over 100 people at Sinai Grace who stepped out to watch, it did lift some spirits.

The fighter jets took off from Selfridge Air National Guard Base at 11:30 a.m. Just a few minutes later, it was flying over area hospitals. Just 21 minutes later, the flyovers were over and the majestic jets were gone.

"When we came outside like this and we see this going on, it's just a moment of peace and you feel, just, wonderful," said Lisa Poe.

While the heroes were honored, people like Howard Barager and his grandson, Owen, took in the flights as well. Howard took pictures as the jets buzzed over Beaumont Troy.

If you want to watch it again - you're in luck. We were stationed throughout the entire area to get the full flight. Watch in our Facebook video below.

"It was a great event, one of the best 10 seconds of my life so far - very thrilling," Howard said.

"We thought it would be a fun way to spend some time together during these hard times," Owen said.

The flyover also went by the Vietnam Veterans of American, Chapter 9 in Detroit where president Paul Palazzo said it meant a lot to them and Americans overall.

"It brings out the pride in us. We're Americans and that pride in all of the freedom we have," he said.

Also on Tuesday, the Blue Angels flew in Indianapolis and Chicago before moving on to other areas to honor more healthcare heroes. 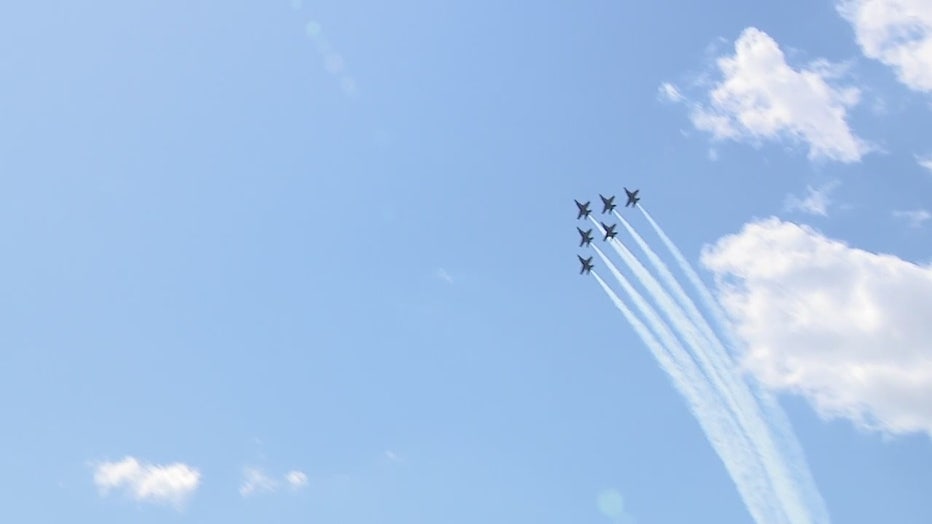