BRIGHTON, Mich. (FOX 2) - Kyle Thil was just about to head inside Busch's in Brighton to start his shift Tuesday morning when he heard shots.

A purse thief shot a woman in the face with a BB gun as she tried to fend off the suspect in the parking lot of the grocery store. Thil, 20, said he could tell the shots came from a BB gun, but at the time didn't know the woman had been shot in the face.

"She was parked, I think over that way, but she tussled right here," Thil said, pointing out where the crime happened. "And then a few shots went off." 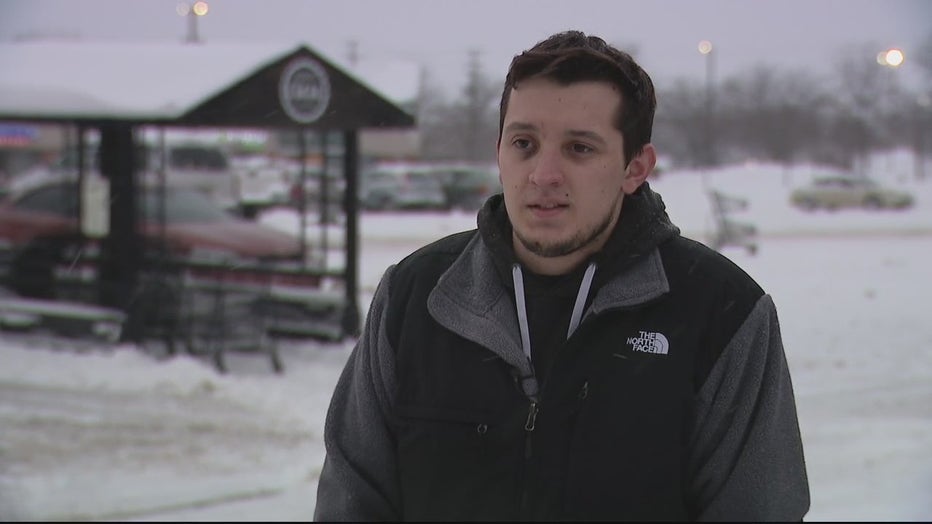 When the thief took off running, Thil, who wasn't scheduled to work that day but volunteered to help ahead of the snowstorm that was coming, chased after him.

The suspect shot Thil in the face during the pursuit, but that didn't stop him.

"That’s from the shot I believe, it literally hit me square in the chin," he said. "It was just pure adrenaline pumping through me. I didn’t even know I was shot. I thought he missed."

"He just bashed me several times and I had to get six staples – three in two different spots," Thil said.

Several people helped him hold the suspect down until police arrived.

"After he said, ‘I surrender,’ he proceeds to say, ‘I can’t get a job anywhere, no one will hire me,’" Thil said. "When he said that I instantly thought, ‘Come apply at my job,’ but I know we won’t hire him anytime soon."

The woman was treated at the scene, and as far as Thil knows, she got her purse back.

"That's really what matters to me," he said.