BROWNSTOWN, Mich. (FOX 2) - She is just 11 years old but is determined to use her passion for school to help other students excel at theirs.

So many school supplies and so many back packs to fill. Elizabeth Wood is just 11, but she is passionate about academics.

She is just 11 years old but is determined to use her passion for school to help other students excel at theirs.

"I think you need books to read so you can make your vocabulary bigger and I think pencils and notebooks, rulers for math," she said.

And the Brownstown middle school sixth grader is also passionate about helping others. As part of the Great Program at her school, kids were asked to do some volunteer work in their community.

So she thought about other students in other schools who may not have the supplies they need to excel academically.

"I use this stuff all the time and I thought they have to need this stuff - we're in the same grade and I use it every day," she said.

So she decided to get that stuff - and give it away.

"I thought - let's get supplies and then I was thinking how are they going to carry their supplies," she said. "Are they just going to use their hands? Nope, then I decided to get backpacks as well."

Her parents, grandparents and local businesses, friends and family, have all donated.

And she's not stopping there - collecting books for school classrooms and libraries. And she's trying to enlist the help of some pretty important people: "Michelle Obama, the president, Ellen, and Scholastic."

She is writing letters and is asking them to get involved, too.

"When she sees the need for something - she takes action," said Adrienne Mihuc, her mother.

"Just sharing my room with Crayola - yes," she said. "I'm probably going to be sleeping on the couch, because it's already taking up my bedroom and closet."

And she doesn't mind one bit and is so happy to see her daughter - so excited to help others.

"You can see the love for it in her eyes and that makes it that much more special," Liz said.

"I'm really excited - I didn't really think it would get this big in such a short amount of time," she said. "There's so many very kind people out there who have helped me."

Elizabeth was originally planning to donate these fully loaded backpacks to Detroit Public Schools, but with the school year coming to a close she's well aware there could be a summer school, a summer camp or a rec center that could be in need.

"She's hoping to get everything done by the end of March," her mother said. "So we can get everything delivered. Her goal was to make sure kids have their backpacks for the remainder of the school year - for the summer time so they can use their supplies and stuff over the summer - and very well into the next year."

Because this student who cares so much about school - and even more about helping people - wants to make sure other kids have all the right tools to make the grade. 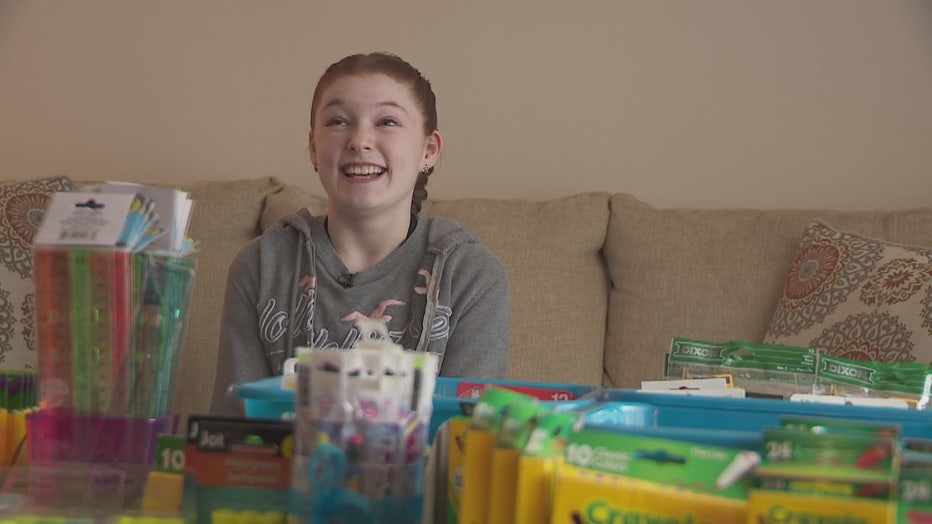