DETROIT - Carlos Carrasco allowed one hit in seven scoreless innings, and Jose Ramirez homered twice to lift the Cleveland Indians to a 7-4 victory over the Detroit Tigers on Sunday.

Cleveland took three of four in this series after entering on an eight-game losing streak, and now the Indians are closing in on a postseason berth. Ramirez had two multihomer games in the series — he also hit two Thursday night.

Matthew Boyd (2-7) was perfect through four innings for the Tigers, but the Indians scored three runs in the fifth. Then Ramirez added two-run homers in the sixth and seventh to make it 7-0. 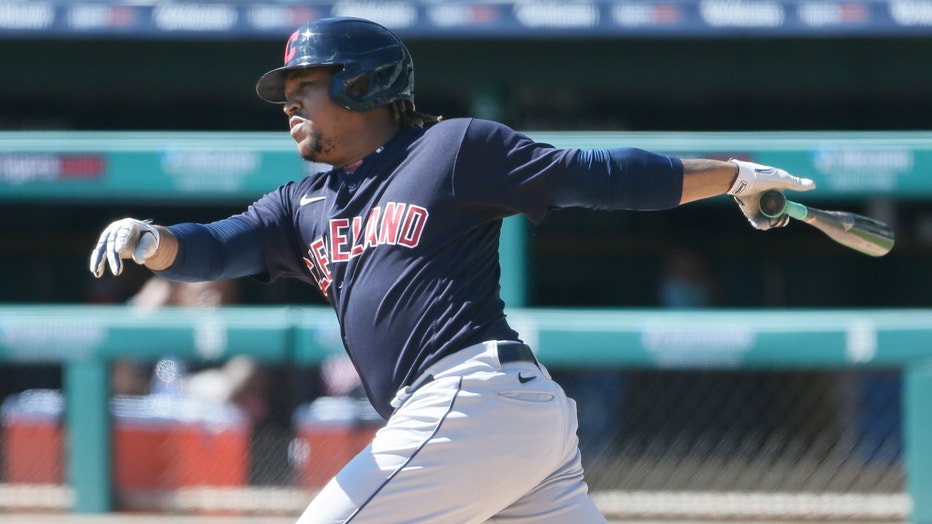 DETROIT, MI - SEPTEMBER 20: Jose Ramirez #11 of the Cleveland Indians his a grounder for an out against the Detroit Tigers during the first inning at Comerica Park on September 20, 2020, in Detroit, Michigan. (Photo by Duane Burleson/Getty Images)

Miguel Cabrera hit his 484th career home run for Detroit in the eighth.

Carrasco (3-4) struck out 11 and retired the Tigers in order in five of his seven innings. He allowed a hit and a walk to start the Detroit third but escaped that jam. He walked two in the seventh but also struck out three in what was his final frame.

Carrasco is now tied with Herb Score on the Indians' career list with 26 games of at least 10 strikeouts. He moved out of a tie with Trevor Bauer.

This was Carrasco's first win of September, but he's been impressive this month, allowing one run or fewer in three of his four starts.

Carlos Santana singled up the middle leading off the fifth for the first Cleveland baserunner. The Indians took the lead on Jordan Luplow's RBI single, and Delino DeShields added a two-run single that inning.

Willi Castro hit an RBI single in the eighth, and Cabrera followed with a two-run homer. Niko Goodrum doubled home another run in the ninth for Detroit.

Tigers: 1B Jeimer Candelario was pulled off the bag by a throw and had to tag Sandy Leon in the third inning. Candelario appeared shaken up after the play but remained in the game.

Detroit is off Monday and plays at Minnesota on Tuesday night. Tarik Skubal (1-3) takes the mound for the Tigers.